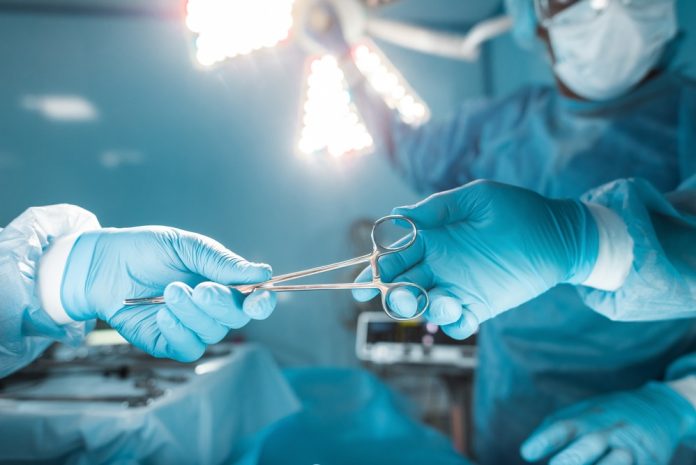 Sara Corrigan (37) says she feels like she is giving birth without an epidural every single day.

The woman, who’s an electronic music artist, was supposed to have a hysterectomy November 2020, but the surgery was postponed till later this April when hospital staff was redeployed to take care of patients sick with COVID-19.

“I’ve given birth naturally twice. I know what childbirth feels like,” Corrigan said at a small rally she mobilized outside the women’s hospital at Health Sciences Centre Saturday. “I’m in the hospital almost monthly.”

She said she found out two days ago her surgery planned for April 19 was once again postponed, following reports that the facility still doesn’t have enough nurses for operations.

“We’re all just being left in the lurch here.”

The head of gynecology at the hospital told the Winnipeg Free Press the post-op department is seriously understaffed at the facility.

Dr. Margaret Burnet told the paper the return of surgical slates has been slow compared to other departments and is disproportionately impacting women awaiting a major operation.

She said women with anemia, pelvic organic prolapse or significant pain, as well as other health problems, have all had their operations postponed.

A spokesperson of Shared Health said care teams have prioritized operations based on patient needs to ensure all operations deemed urgent or emergent including those that require the attention of gynecologists still happen.

Health officials begun redeploying surgical teams when the coronavirus pandemic started last year, and then again in the fall as hospitals started to flock with patients with COVID-19.

Many staff members who were redeployed returned to the hospital in a few weeks, the spokesperson added, further saying that surgical capacity is forecasted to grow over the new couple of weeks, and hospitals start addressing a backlog of patients with benign conditions.

“We are sympathetic to what patients waiting for surgeries deemed to be non-urgent to their long-term health are going through,” the spokesperson said.

Corrigan said receiving the news that her April 19 surgery had been canceled yet again was like a nightmare.

“I feel like I’m in an empty void hopeless without options. I have no idea what to do. I’ve considered, like, do I need to go to Mexico to try and get this solved? I shouldn’t be a Canadian in this situation. It doesn’t seem real,” she said.

“All they can do is medicate me and send me home. These medications have completely eaten away at my stomach lining. There’s foods I can’t eat anymore. I can’t exercise.”

She said she decided to hold a rally, which was attended by just over a dozen individuals, after writing her concerns to Health Minster Heather Stefanson and Manitoba Premier Brian Pallister. Corrigan said she got generic responses from both offices, which according to her, are inadequate.