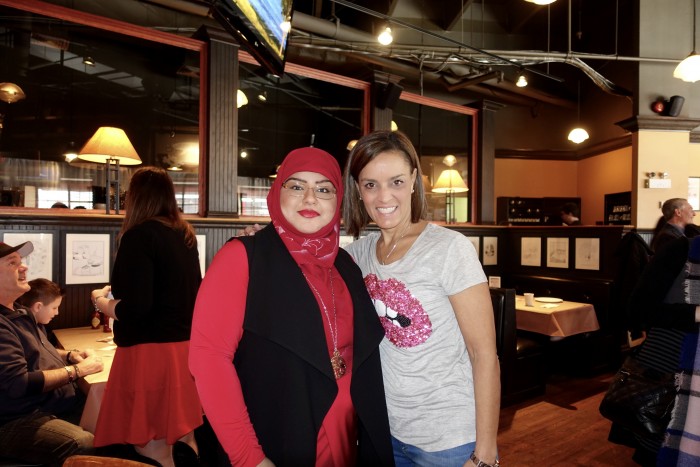 After the devasting shooting in Quebec City, several Montreal Mosques held an open house welcoming their neighbours for some conversation, a tour, and some light refreshments.  The idea was to dispell racial and religious connotations that have become common place in media today.
West Island Blog caught up with Fariha Naqvi, founder of CanadianMomEh.com, a popular blog addressing issues of social diversity, at the Makkah Al Mukkaramah Mosque in Pierrefonds.
“We cannot sit back and wait for someone to do something, to speak up, to make a difference. We have to be the difference the world needs. Each and every single one of us.” Fariha Naqvi-Mohamed as the doors continued to open with supportive residents of the West Island.
Here are some questions that were asked and answered on a live segment broadcast from the West Island Blog Facebook page on Sunday, February 12:
WIB: How do you feel as a mother since the shooting in Quebec?
FN: I was, or course, shocked and frightened by this act of terrorism.  I had to explain to my children that there was a shooting that took place only hours from our mosque where people were killed during peaceful prayer. It was the hardest thing I have ever had to do.
WIB: Are you afraid to come to your mosque now?
FN: I was born in Canada.  I am thankful to be a Canadian. Thankful for all the support of people, including our Prime Minister, who spoke out on various social media outlets against this act.  This could happen in any place of worship.  I refuse to be vilified. I believe good will prevail.
WIB: Why do you wear a Hijab? What does it mean to you?
FN: The hijab is a symbol of modesty and dignity. When Muslim women wear headscarves, they are readily identified as followers of Islam. I choose to wear it. I am not forced to wear it contrary to what some people think.  It is not always a bed of roses to wear my religious beliefs so openly but make no mistake it is my choice.
WIB: I am not comfortable with women who are fighting to wear their face covered during security checks at airports.  Are you?
FN: The women you are talking about represent a very very small portion of Muslim women. I agree with you.  I want everyone to show their face when there is a question of security in play.  This issue does not represent the majority of Muslims. I want my flights to be safe for my family in whatever way necessary, just like you.
WIB: What will you do moving forward to help ensure this never happens again?
FN: As a spokesperson for the diverse face of Canadian moms, I intend to speak out every chance I get.  I will be writing to help my personal process, as well as help others, see.  I think opening our doors so our neighbours can visit our places of worship can go a long way for those to learn that all Muslims are not terrorists any more than all white people hate Muslims.  We have to remember we are dealing with a radical portion of the population not the entire group from either segment.
The us-vs.-them needs to stop. NOW. We need to stop it.
Visist Fariha Naqvi at : CanadianMomEh.com,