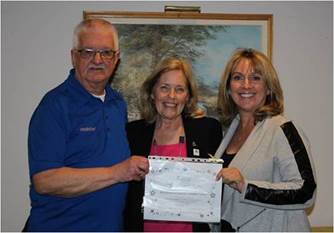 West Islanders have been coming together since 2008 to celebrate cancer survivors at the Relay for Life West Island, one of the Canadian Cancer Society’s 85 annual relays across Quebec.  Committees of local volunteers plan and execute all facets of the twelve-hour relay, including a banquet for survivors, entertainment, luminary ceremony and breakfast the following morning.

In 2016, a small team of volunteers on the Relay organizing committee started a pilot program to bring the Relay for Life experience to seniors on the West Island.  And its popularity has grown at two local seniors’ residences.

On May 11th 2018, l’ Esterel Apartments in Pointe-Claire will host its third on-site mini-Relay for Life luminary ceremony.   When the team first approached l’Esterel’s manager, Jean-Claude Ouellet, he and his girlfriend, who had been diagnosed with cancer, thought it would be an opportunity to bring people together. As Mr. Ouellet explains, “this cause is so relevant for so many here at l’Esterel, who are themselves either affected by cancer or want to help friends and neighbors, but due to health issues, such as respiratory and/or mobility challenges, getting to-and-from an event like that is just not possible”.

Their first mini-Relay for Life wasn’t well communicated in all 3 l’Esterel buildings, so only a small group of 15-20 residents participated. Volunteer coordinators, Tiziana De Spirito and Carla Rotondo recall that the residents were disappointed it rained that year, but around 7:30pm the sun came out and they were able to hold their Luminary ceremony outdoors like the main Relay for Life events.  That display of lighted and beautifully decorated candles along the path in front of the l’Esterel apartments was so special they decided to repeat it the following year.

His girlfriend has since passed away, but Jean-Claude advertises the now annual event in each of their buildings, and this year news of its popularity is attracting residents from the nearby Maywood Residence.  Pointe-Claire Councilor, Madame Cynthia Homan looks forward to spending this evening with her senior constituents and, last year it had attracted so much attention, Realstar’s District Manager, Manon Paradis also looks forward to joining  in the festivities again this year.