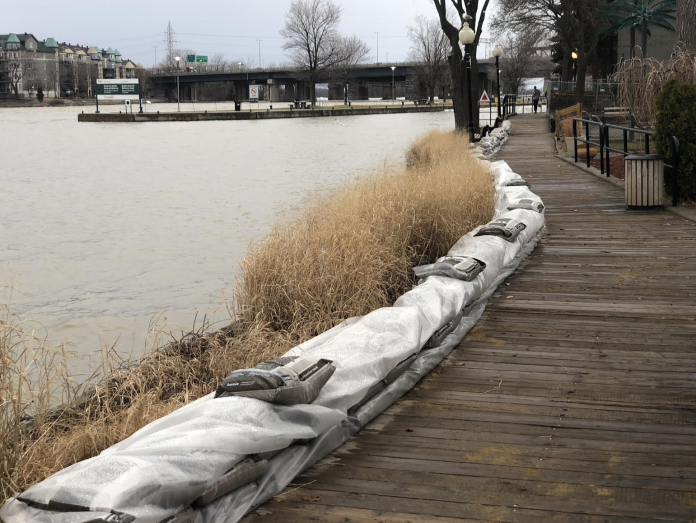 Île-Bizard residents have expressed concern at the impending flooding that will likely result from heavy rain and melting snow along the Ottawa River.

Environment Canada has issued a special weather warning calling for significant rainfall in the coming days. Municipalities along the Lake of Two Mountains can expect water to rise, which may lead to additional flooding in areas such as Sainte-Anne-de-Bellevue, Senneville, Pierrefonds, and Île-Bizard. 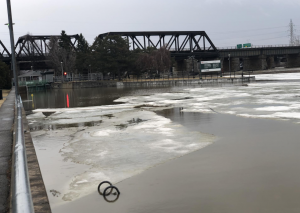 “We have close to 20,000 sandbags on the island right now,” said Île-Bizard-Sainte-Geneviève Borough Mayor Normand Marinacci.  “We have distributed close to 12,000 bags to various locations as well as sand and bags for those who can load their own. There are more than 400 homes that were flooded in 2017.  There are not enough sandbags to protect adequately every house, which is why we encourage citizens to prepare for possible floods and protect their homes.”

The official borough Facebook page also reminded residents that flood preparedness is a shared responsibility, and that citizens must take the proper steps to ensure the safety of their person, of their family, and of their property.

This has left residents feeling concerned at what they consider inadequate preparation for flooding, as well as a potential shortage of sandbags.

In collaboration with the borough, Rapid Relief Team, a global volunteer organization, is coordinating a volunteer effort to help Île-Bizard residents sandbag their homes on Friday and Saturday to prepare for flooding. The organization expects to need help from 100 volunteers Friday and 200 volunteers Saturday. Anyone interested in volunteering can report to the Île-Bizard cultural centre (490, montée de l’Église) as of noon on Friday. Details for Saturday have yet to be announced but will be posted to the West Island Blog Facebook page as information becomes available. Bradley Anderson of Rapid Relief Team expects to need the help of 200 volunteers. When reached by West Island Blog’s Rhonda Massad, Mr. Anderson stressed the importance of being prepared.

“Be proactive. Don’t wait for the water to get to your foundation,” he said.

Rapid Rescue Team has set up the following initiative:

What;
There is a huge volunteer sandbagging effort being organized that will make sandbags and help distribute them to residents in need as well as assist with laying the sandbags to protect the homes from the rising water.
When;
It is starting at 12:00 on Friday, April 19, 2019
Where;
Bibliothec de L’Ile Bizard
500 Montee de l’Eglise, Ile Bizard.

The city of Sainte-Anne-de-Bellevue announced this afternoon that it was, as of Thursday, April 18 in INTERVENTION 1 mode: water levels on Lake Saint-Louis and the Lake of Two-Mountains are stable, but the rain 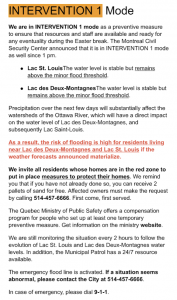 in the coming days is expected to have an impact on water levels. As such, there is a high risk of flooding. The city is monitoring the situation every two hours.

Residents may receive two pallets of sand free of charge by calling 514-457-6666. First come, first served. Should residents detect an abnormal situation, they can contact the city at any time, at the number above.

The city of Rigaud and Pointe-Fortune has recommended residents living along the water evacuate their homes, as water from the Carillon damn is expected to cause flooding in the coming days. The Carillon damn controls the flow of water coming down the Ottawa River and into the Lake of Two-Mountains. 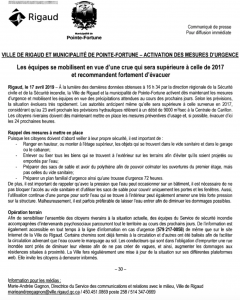