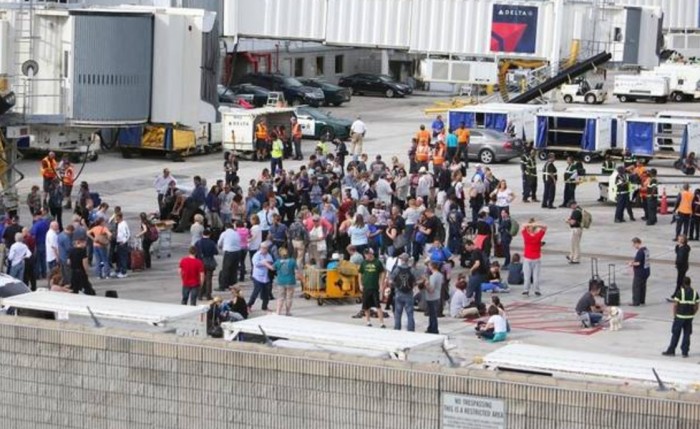 As we watched the tragic events of the latest gun shooting in the United States on TV, there was an underlying knowledge that given the week and the Florida location, chances were high that we, as West Islanders, would know someone on their way home to Montreal in this latest act of inexplicable violence. A lone gunman,Esteban Santiago, 26, opened fire at Florida’s Fort Lauderdale-Hollywood International Airport, killing five people and injuring eight others, according to the Broward County Sheriff’s Office.

A West Island family, that preferred to remain nameless, was terrified as they were going through security when the shooting started Friday, January 6, 2017.  The shooting began in Terminal two, the parents were separated from their adult children who were in another terminal. The parents were taken by security to a closed office where they stayed throughout the incident.

“My husband and I were whisked away into an office,” said the mother of three. “I kept telling the officers I needed to get to my children. They were taken to the tarmac for safety.”

As the events unfolded the family stayed connected by texting each other giving them some sense of relief that would not have been possible before the invention of the cel phone. The eldest daughter kept her friends apprised of the happenings with up to the minute Instagram posts that only days earlier were filled with pictures of her on the beach.

Once the airport was cleared, patrons who had vehicles parked at the airport were allowed to leave the premises. Passengers without a mode of transportation were bussed to Terminal 4 at Port Everglades, where assistance was provided.

“Words can’t begin to convey the emotions we went through today,” she said the daughter. “Running for our lives and trying to find an exit. My parents locked in a closet, grandmothers sobbing as they were propelled to the ground, babies on the floor, SWAT teams everywhere.”

“We have walked through the familiar halls of this airport since we were little kids and never could I have pictured a scene like this. These horrific shootings need to stop! We are so grateful to have finally made it out safely.”

The family was not able to leave as the Fort Lauderdale-Hollywood International Airport was, understandably, closed after the incident.

Several airlines said they would allow passengers booked on Fort Lauderdale flights Friday and Saturday to rebook or cancel flights without change fees. Travelers with flight insurance were advised to keep their receipts for all expenses, contact their airlines for new flights and contact their insurers’ emergency assistance lines.

The family has been reunited and will take the necessary steps to get home once the lockdown is lifted.