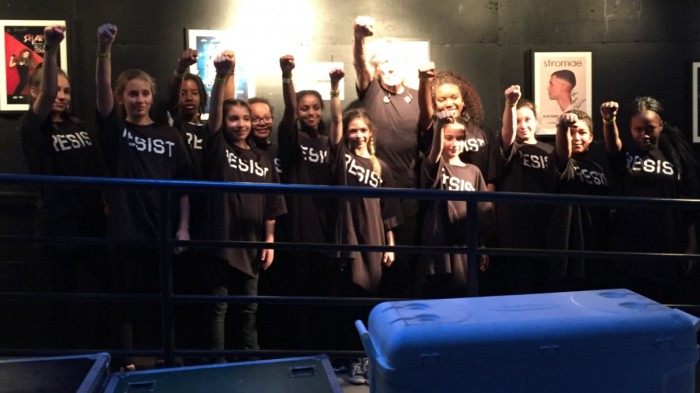 For three nights this week, H4L Dance Complex dancers were high on excitement as they performed alongside Roger Waters of Pink Floyd fame.

Accompanied by studio owner and instructor Christine Harrison and three parent chaperons the dancers were greeted at the Bell Centre and led to their dressing room to be fitted in their costumes.

According to dancer Sienna Mazzone’s mom, Tania Teodori, the costumes consisted of a black t-shirt with the word RESIST printed on the front which the dancers wore under an orange jumpsuit that had the words MAGGIE’S FARM displayed in bold black letters on the back.

“We were escorted to the big stage for a dance and soundcheck rehearsal with Roger Waters himself,” explained Sienna. “He was was friendly, I loved his cool British accent”.

The dancers waited patiently backstage for their 9:15 p.m. contribution to the show.

“We were so excited and nervous all at once,” relayed Sienna. “We walked on stage and stood for at least two minutes in a line across the whole stage in our orange jumpsuits with our heads covered with black cloth. We could hear the cheers and screams from the audience of more than 20,000 fans.”

“The part in our jumpsuits was very serious, almost robotic,” Sienna continued. “Then we heard our cue, ‘all in all, we’re just another brick in the wall’ and we opened our jumpsuits to show the word RESIST to the audience. We then removed the whole jumpsuit because it was all velcro. Then we were finally free to enjoy our freestyle moves until the end.”

After the show Waters took a moment to visit with the dancers, taking pictures and giving high fives.

Congrats to all the H4L dancers!! Well done!!