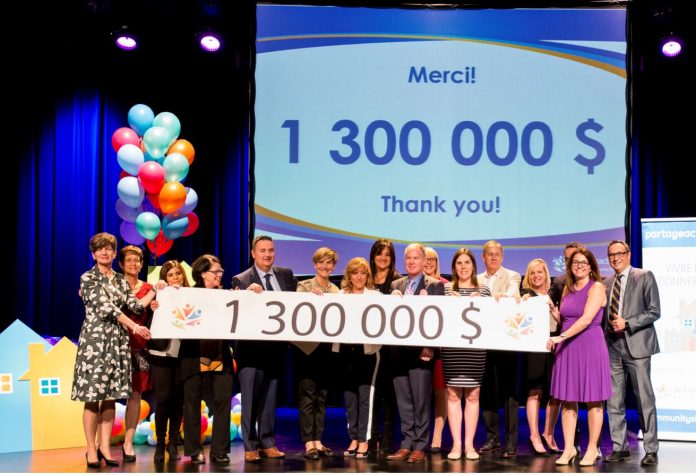 Excitement was in the air on April 23rd when West Island Community Shares celebrated a record-breaking 2018-2019 Annual Campaign. Under the chairmanship of Jacques Garceau, a long-time West Islander who recently retired as Senior Vice-President of Network Engineering at TELUS, this year’s fundraising campaign raised a record $1.3 million which was distributed to 41 local community groups and projects during the Live Here, Give Here Celebration event held at Collège Beaubois.

More than 200 people were in attendance, including members of the 41 community groups, corporate and fundraising partners, donors, elected officials and volunteers.

“We are extremely grateful to everyone who contributed to this year’s record annual campaign results,” said Mr. Michel Béland, President of West Island Community Shares and Regional Vice-President, RBC Royal Bank, Montreal North-West and Outaouais region. “These results would not have been possible without the help of our dedicated Board of Directors, Community Shares’ incredible staff, and most of all, our generous donors.”

“I am very proud to have been this year’s Campaign President,” said Mr. Jacques Garceau, Annual Campaign President and Director of the Board. “It is so important to give where we live and support local organizations who are the backbone of our community. It is very impressive to see everyone coming together to help our community. Thanks to everyone’s hard work and generosity, West Islanders will continue to receive the services they need right here in the West Island.”

“The increase in funds available this year has allowed our Fund Distribution Committee to support two new projects: Ricochet, and Sunshine Residence,” said Chantal Carrier, President of the Fund Distribution Committee. “The Committee wanted to show its support for these two important new initiatives which are addressing a real housing problem in the West Island.” Ricochet is a new project piloted by AJOI whose mission is to create housing resources for young people experiencing residential instability in the West Island, while Sunshine Residence, under the guidance of Citizen Advocacy, provides much needed transitional housing for adults living with mental health issues.

“It has been a whirlwind since I joined Community Shares last September”, said Sophie McCann, Executive Director of West Island Community Shares. “I am beyond excited to be able to give back $1.3M to our community. This is an even better scenario than I could have imagined when I joined seven months ago.” Record funds were raised in part by West Islanders who believe in helping their community, as well as the generous corporate partners who contribute to Community Shares’ 100% model such as Pfizer Canada, Merck Canada, Tenaquip, TELUS, AVON, Desjardins, Pharmaprix, Jean Coutu, Spinelli (employee
fund), Roxboro, Targray, Bromelin, Construction Jean Houde, Novartis and Otsuka. Other fundraising partners contributed significantly to reaching the goal of $1.3M including RBC, BNC, TD and BMO.

About West Island Community Shares
West Island Community Shares is a unique non-profit organization dedicated to building a strong, inclusive, peaceful and healthy community. We do this by raising crucial funds for 41 local community groups which focus on developing strong and resilient children, creating bridges to support vulnerable populations, and empowering women to reach their full potential for themselves and their families. West Island Community Shares’ unique model allows 100% of donations to be given back to these community projects thanks to the generous support of corporate partners and partial revenues from internal events which cover all operational costs.