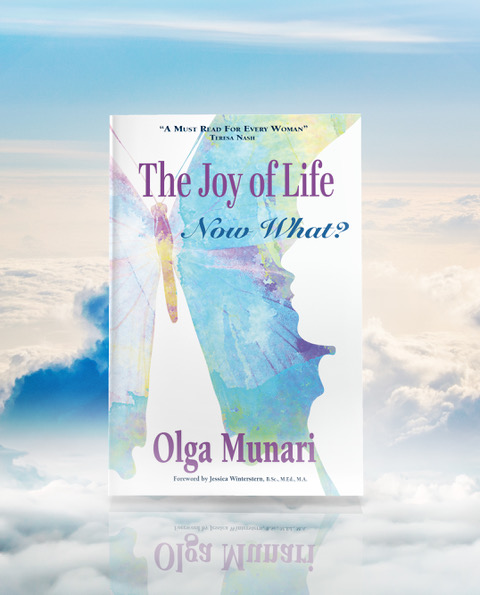 How many of us run through our day on autopilot, portraying competency as we get through our chores and family obligations without an actual thought about our happiness? Or worse, we know we aren’t content, but we hide it deep inside because we believe our joy doesn’t matter, that we don’t matter. It’s a scary thought that we bury deeper, refusing to investigate their origins.

Olga Munari is a woman who had everything that most North American women aspire to – husband, children, beautiful home, and full-owner of a successful business. But Olga was a woman who held secrets that kept her from finding joy. On the outside it was one thing; inside, that was another story begging to escape.

“I felt insignificant,” the 55-year old author confides in the first chapter of her bestselling 2020 memoir, The Joy of Life Now What? published by the Montreal-based Smiling Eyes Press.

During her childhood and adolescence in Outremont, Montreal, Olga felt she didn’t fit in with her family and friends. These feelings of inadequacy reach new depths at the tender age of 10 when Olga is a victim of sexual abuse. Her coping mechanism – hide who she was and what she felt, putting up a front of being a tomboy so everyone can revel in her strength and not expose her as a “small unsure child” or detect that she felt “unworthy” of love.

Now What details how these insecurities followed her into adulthood and in her marriage, inciting her to create strict routines and tasks that reflected what she thought a proper woman should do—never questioning if these chores she pushed onto herself fulfilled her.

As fate would have it, Olga was thrown a curveball – breast cancer. Olga writes in her memoir, “Cancer saved me.” We see a transition happening in the story and a new understanding emerging in Olga— “Beating cancer was my second chance at life.”

She begins to chart her way in hopes of finding joy in her life.

Olga writes about the therapies and those that aided her into addressing her issues with fear, trust and forgiveness. Recounting not only the exercises she completed but also her emotions during the activities such as her anxiety and her push not to let fear stand in the way.

This second chance at life is not all smooth sailing; it leads to upheaval in her marriage ending in divorce and a relapse into self-doubts as she finds herself in a new yet unhealthy relationship, one of mistrust, more self-doubts, mental abuse and temper-tantrums.

Clearly written and shockingly honest, she admits to her flaws and doesn’t shy away from describing situations and emotions that at one time felt like deep core wounds. Her straightforward manner pierces platitudes, keeps her story comfortable to read and relatable.

This memoir is Olga Munari’s debut as a primary author. She has one earlier book she co-authored in 2012, The Joy of Cancer: A Journey of Self-Discovery under her belt

In The Joy of Cancer, Co-author Kim Mecca narrates Olga’s inspirational cancer journey beginning in 2006, where we get a taste of Olga’s strength and resiliency.

Her memoir, 14 years later, The Joy of Life, Now what? reads differently. It’s also a courageous book, but one told by Olga, in her own words. It presents a more even-handed picture of who Olga is, she’s strong, but she is also like every one of us, making mistakes, and searching for her way. As she concludes her memoir, she asks, “Do you have the courage for the Now What part of life?” daring each one of her readers to take up the challenge.

You can find Olga’s bestselling book on Amazon.ca