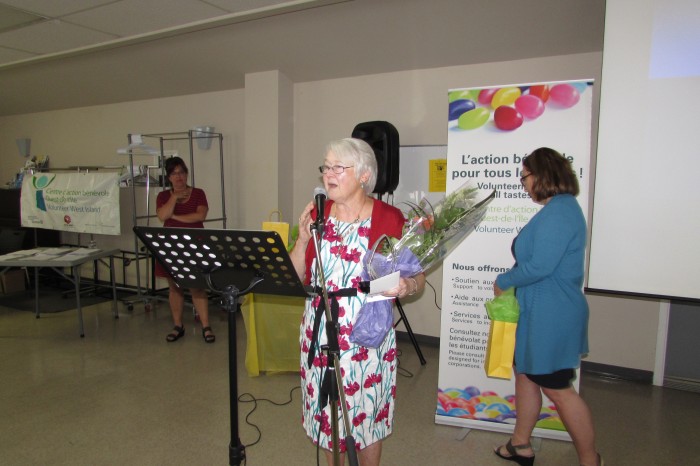 At Volunteer West Island’s (VWI) annual general meeting last week, the excitement was felt in the air for the plans to celebrate next year’s 50th anniversary.  With a reinstatement of grant money that was lost in previous years causing the organization to lean on their surplus, spirits were optimistic that the next few years would see more solid financial results, something to be celebrated.

Out going president of four years, Patricia Empsall explained that a committee has been established to work on the upcoming celebrations of Volunteer West Island’s 50-year presence serving the West Island and its citizens.

The not for profit facilitates volunteerism by promoting, recruiting, training and referring volunteers to meet the varied needs of the community.  A newer program offered by VWI called Caring Paws Animal Therapy was established in 2015 while an older favourite, Meals on Wheels has been serving up meals to those in need for since 1969 where the very first kitchen is still operating at Summerlea United Church in Lachine. Today more than 850 volunteers, work out of 13 kitchens.  The team prepares and delivers to 340 Meals on Wheels clients.  There are 24 Frozen Meals and Purees clients.  The total of meals served by the two groups last year was 46,656.

Just two of the large list of efforts supported by Volunteer West Island.

For more information or if you want to volunteer , please  visit www.cabvwi.org