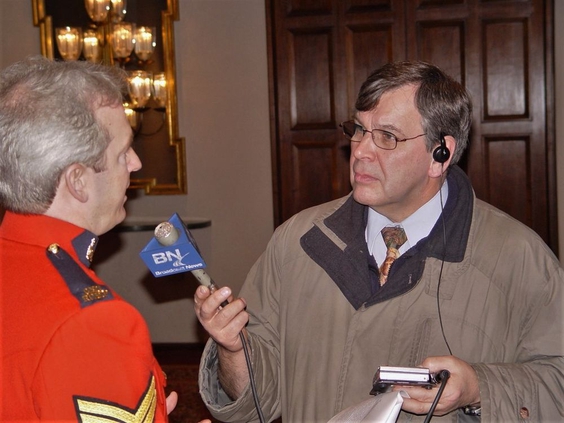 Peter Rakobowchuk, a journalist with Canada’s national news agency whose high energy delivery was instantly recognizable to decades of listeners, has died.

More widely known by his radio moniker Peter Ray — a supervisor early on told him it sounded smoother — the irrepressible Rakobowchuk had been undergoing chemotherapy for liver cancer. He was 71.

“He had such a distinctive voice that no name was required,” said Rose Kingdon, broadcast director at The Canadian Press.

In fact, according to those who were there, guests at his wedding to his wife Pat Enborg three decades ago clamoured for him to do his famous sign off when he got up to respond to the roasts.

“Do the sign-off, do the sign-off,” they chanted when he picked up the microphone. To much applause, Rakobowchuk boomed: “Peter Ray, Montreal.”

Born in Verdun, Que., Rakobowchuk began his career as a DJ with various private radio outlets, known at one point as “Rockin’ Peter Ray.” In February 1979, he joined Broadcast News, a subsidiary of The Canadian Press, in Toronto. He transferred to the Ottawa bureau 18 months later, spending four years there before moving to Montreal, where, apart from a six-year stint covering the legislature in Quebec City, he remained.

A fearless reporter, Rakobowchuk covered a wide array of assignments with unbridled enthusiasm. He was there when the Queen signed the Constitution. He was at the Oka crisis. He covered referendums, protests, political leadership races and elections, sometimes racing to events in the “War Wagon,” a 1978 Chevy Malibu, the first car he owned.

He loved the craft, especially when news was breaking, Enborg said on Wednesday.

“He didn’t hesitate at all to be called on to a story as it was developing, and to follow it through to its end — no matter how long it took,” Enborg said. “He loved every minute of it.”

In the early ’90s, Rakobowchuk slipped into a phone booth to file a report on a protest south of Montreal when he began having difficulty. Tear gas, he explained apologetically, as he got his report across between coughing bouts.

Despite the pressure of years of constant deadlines, Rakobowchuk managed to find a puppy-like joy in his work.

“To say he was enthusiastic is a bit of an understatement,” said Nelson Wyatt, a long-time colleague and friend.

During one protest, Rakobowchuk came across looters in a store and jumped right in to shoot video. When voices behind him yelled, “Move!” he responded to the officers poking him in the back with their batons: “In a minute!”

Rakobowchuk was known for asking questions others were reluctant to ask, such as when he tackled then-premier Jean Charest about the curls he had just had shorn, or grilled former premier Robert Bourassa on sovereignty. Despite groans from francophone media, they invariably led their reports with the response.

Despite his willingness to engage pointedly with newsmakers, he was seldom angry or mean.

He did once get under the skin of Bob Gainey, then coach of the Montreal Canadiens, when he cited Enborg as wondering why Gainey was sticking with goalie Carey Price. “Carey Price is a thoroughbred maybe your wife doesn’t recognize it,” Gainey retorted, before adding that she didn’t bake bread very well, either.

Rakobowchuk took great pride in adding print to his journalism skills, and continued working after taking sick leave in 2015 when he was diagnosed with throat cancer.

He also developed a keen interest and expertise in stories about space exploration.

“His passion and enthusiasm never waned,” said former Montreal bureau chief, Donald McKenzie. “Never was that enthusiasm more pronounced than when he was writing about the space beat.”

One of his greatest joys was getting to go down to Florida to cover the final space shuttle launch in 2011.

“He practically bounced off the ground to be able to go down there and cover it,” Enborg said.

Besides Enborg, Rakobowchuk is survived by his son Alex and daughter Lisa, as well as Giselle, a daughter from a previous marriage. His five siblings predeceased him.

In his final post on Facebook less than a week ago, he urged people to get tested for the coronavirus after his came back negative.

“A great stress reliever,” he said. “Worrying about whether or not you’re positive is not good for your state of mind.”

Due to COVID-19 restrictions, the family will be holding a private service Aug. 12 at Collins Clarke MacGillivray White Funeral Home in Pointe-Claire, Que.

This report by The Canadian Press was first published on Aug. 5, 2020.