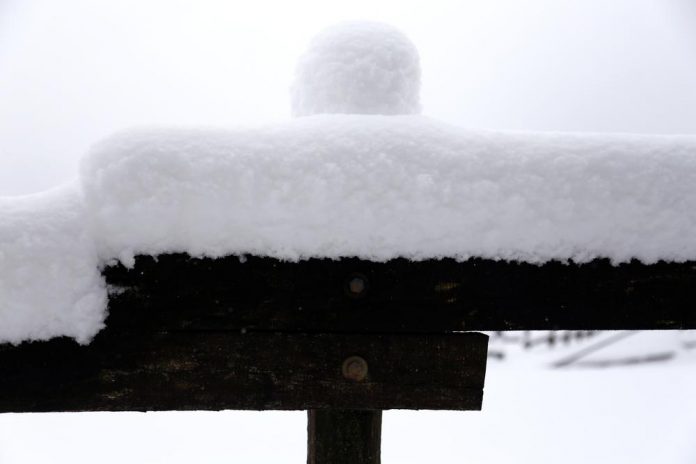 A blast of winter weather has come on the GTA and several southern Ontario areas, and it could go as low as 25cm of snow on parts of Toronto by Tuesday morning. The snowfall started about 8:30 p.m. and is expected to advance into the morning.

Toronto and the areas of York, Durham, Peel, and Durham are all under a snowfall warning.

“Heavy snow is expected to move into the area this evening into Tuesday morning with snowfall accumulations near 15 cm, possibly reaching 20 to 25 cm in some places,” Environment Canada said in its warning.

According to the weather agency, wind gusts of up to 50km/h may also be possible during the height of the storm.

A winter storm warning is in effect for Oakville and Burlington and other parts of southern Ontario, including Niagara Region and Hamilton. Those areas could record between 20 and 30cm of snow.

“Visibility may be suddenly reduced at times in heavy snow. Surfaces such as highways, roads, walkways, and parking lots may become difficult to navigate due to accumulating snow,” the advisory stated.

The snow is expected to diminish by Tuesday morning.

The snowfall is striking the GTA just as thousands of kids are preparing to resume in-person learning. In-class learning is returning Tuesday for students in Peel Region, York Region, and Toronto after a prolonged break from classroom learning due to COVID-19 lockdown.
In a tweet Monday night, the Toronto District School Board reminded parents and guardians that decisions about possible school and school bus closures would be made based on the best info available by 6 a.m.

Whereas a stay-at-home directive remains in effect for Peel, York, and Toronto, transport agencies and police also gave reminders to those who must go out for important reasons to leaves themselves more time to get around.

Eric Holmes, a spokesman for the city’s transit department, told CP24 late Monday that folks should be ready to spend extra time getting around Tuesday.

Particularly given the inclement conditions, Holmes added that individuals should obey the stay=-at-home directive as much as possible.

“Give yourself lots of extra time to get to where you need to go, and then get back home so that you can follow the stay-at-home orders,” he said. “And if you see our snow clearing vehicles out there, give them time and space to do what they need to do to keep the roads safe.”

At about 9:40 p.m, the city stated that winter operations had started on expressways and major roads.

At around 10:30 p.m., Ontario Provincial Police claimed they had already witnessed about 20 collisions in the GTA due to slippery road conditions.

Earlier in the day, Holmes stated that workers have to prepare for this snowfall since last week.

A5 2.5cm of accumulation, plows will thump expressways, and at 5cm, plowing operations will start on major roads. Plows don’t start clearing residential streets until about 8cm of accumulation.

Holmes went on to say that even when the snow halts, there will still be some work to be done to clean up the streets.

“The cleanup following the storm, that is a nuanced operation. It can take days. So we ask people to wait to call 311 if they are concerned about the snow clearing operation,” Holmes added. “That is because our crews are going to be out for the next couple days, plowing out roads, plowing out sidewalks, making transit stops safely. And that operation is going to continue.”

Environment Canada was projecting two phases of heavy snow today. The first blast of inclement weather was expected to come this morning, but it never happened.

Today and tomorrow, freezing temperatures are expected to pave the way for warmer temperatures later this week.

A low of -9 is expected through the night, but that will feel near -12C with the wind cold. A high of -7C is in the projection for Tuesday, but the wind chill will make it feel like -18C.

Come Wednesday, Toronto will experience sunshine and a high of -3, and the mercury is expected to hover around the freezing mark on Thursday through Sunday.