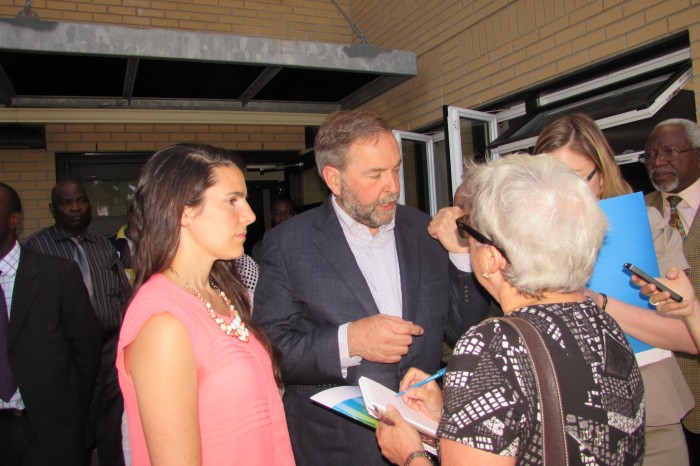 with files from Jim Morrison

With the reduction in subsidies by the Harper Government, Thomas Mulcair along with Member of Parliament for Pierrefonds—Dollard Lysane Blanchette-Lamothe visited two cooperatives in Pierrefonds Cloverdale Village and Terrasse Soleil to reassure residents that should the NDP be elected they would reinstate the subsidies immediately.

Mulcair stated in a press conference at Cloverdale that the investment in affordable housing will reach more than two billion dollars by 2020 to maintain current funding for housing cooperatives and social housing. 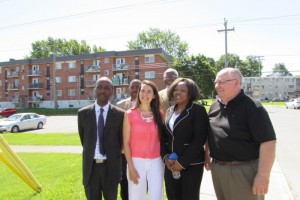 “Housing cooperatives play an important social and economic role in Canada,” said Mr. Mulcair. “Their strength lies in their diversity and resourcefulness. An NDP government will be a real partner by making stable, long term investments in social housing.”

Blanchette-Lamothe, has met with the members of the boards and the residents of both cooperatives that she represents in the House of Commons.

“Affordable housing and cooperative housing are in danger because of the end of the federal agreements”, Blanchette-Lamothe stated during a recent press conference.

The Canada Mortgage and Housing Corporation (CMHC) is ending its subsidized funding in October, 2015. The Cooperative habitation Cloverdale, funded by the Societé habitation du Quebec (SHQ), is a Non-Profit Organization created by community members in 1999 at a moment, when tenants had bought one third of the building complex. Since then, the Coop owns and manages several buildings working in renovations with the Direction de habitation SHQ and with the borough.

The Project Reno VI is investing more than $ 2 Million in renovations covering approximately 58 buildings with 866 apartments which cover the Cloverdale project.

“I grew up near here, I can see the changes between then and now.  There is a huge community effort around youth and seniors here at Cloverdale and Terrasse Soleil.  Cutting subsides would impact all the efforts made by those in this community over the past 20 years,” Blanchette-Lamothe said in an interview after the press conference.

Cloverdale Village consists of one seniors residence, three children’s centres while housing more than 3,000 people with diverse backgrounds. Terrasse Soleil consists of 230 rental units.  Cloverdale receives more than $26,500 per month in subsidies from the federal government while Terrasse Soleil receives $5,556 per month. When subsidies are no longer available rents will go up between 25% and 75%.