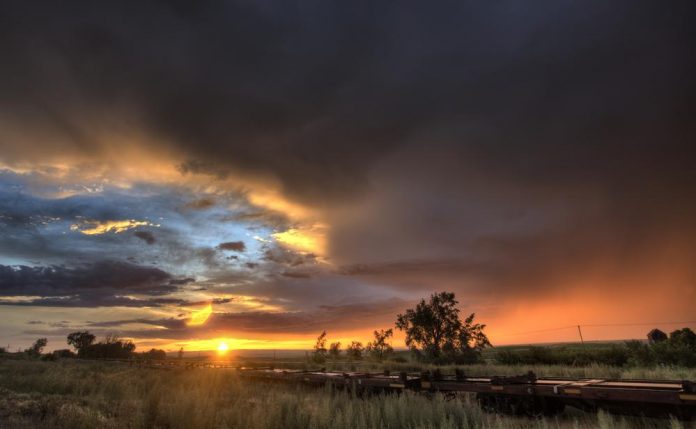 As of 4:30 p.m. local time Wednesday, the Sask. Public Safety Agency (SPSA) reported that the wildfire is approximately 65% contained. However, wind speeds and changing wind direction continue to make the situation difficult.

Residents north of White Star Road are now allowed to return to their homes, as per the SPSA. Initially instated highway road closures remain in effect, as does the Prince Albert state of emergency.

The city, which is around 135km northeast of Saskatoon, said the flames had forced the evacuation of at least 50 homes by late Tuesday afternoon.

An immediate evacuation order was additionally released Wednesday by the nearby Rural Municipality of Garden River for the Berg subdivision. A news release says the wildfire is an immediate threat and locals “must start evacuation immediately.”

Residents who can get out on their own are instructed to use Highway 2 South and proceed to the Margo Fournier Center in Prince Albert.

On Wednesday evening, Prince Albert police issued tickets to two people who were

“located unlawfully inside the perimeter at the Cloverdale fire overnight Tuesday.”

The area along Highway 55, between Prince Albert and the Pulp, has been evacuated because of the fast-moving fire.

The tickets were $2,000 each and issued to a man and a woman who officers say they found inside the fire area and who did not reside in the area.

“Residents have been evacuated and no one is being allowed to go back into the area at this time for their safety and the safety of first responders working in the area,” the police said on Facebook.

By Wednesday morning, the fire had grown to around 40km² and was moving east away from Prince Albert.

Four additional crews have arrived to fight the fire on the ground to help 5 helicopters, multiple air tanker groups, and heavy equipment, as well as the Prince Albert Fire Department and Buckland Fire Department.

Roberts said thus far, no homes have been destroyed.

The SPSA has put up 45 evacuees in hotels in Prince Albert and is offering them food, clothing, as well as other necessities.

Joan Hrycyk, the SPSA’s crisis support person, said they will contact evacuees when it is safe to go back home.

A City of Prince Albert new release said police are surveying the area.

SaskPower spokesperson Joel Cherry said around 8,000 customers are still without power, extending from just north of Prince Albert to La Ronge, which is around 215km further north.

The rural Montreal Lake Cree Nation, located around 100km north of Prince Albert, currently has no power and thus no access to water, fresh food or gas.

In Air Ronge, around 235km north of Prince Albert, cars waited in long ques all day to get gas. Local resident Tom Roberts said the pumps were running on a generator.

Cherry said power has been restored to around 1,000 consumers in the rural areas between Spruce Home and Christopher Lake.

And Wednesday morning, crews were cleared to enter the fire zone where fifteen power structures had been damaged.

SaskPower says conditions have been favorable for workers, and that they are making significant progress toward repairing the damaged transmission line that serves consumers north of Prince Albert.

“Once our crews got in there, we’re working non-stop until the work is done. We’re not going to shut down for the night or anything like that,” Cherry told CBC Saskatchewan Wednesday afternoon.

“There’s the rotating crews there to make sure people are working within proper fatigue management cycles.”

Lindsay Mazenc, external communications manager at SaskTel, said there are 17 cell sites that are apparently depending on generators due to the blaze.

Whereas fire moves northeast and threatens properties on the eastern edge of the blaze, some homes near Prince Albert seem to have escaped relatively unaffected.

“The fire seems to have missed our place and that of our immediate neighbours,”

said Harold Fisher, who has a farm along Cloverdale Road northeast of Prince Albert.

Fisher said it was terrifying watching the smoke creep nearer to his home, but firefighters were able to establish a boundary around buildings in that area.

“Just before dark, water bombers came over and dumped 20 loads of water kind of in a strip along behind our properties.”

He said he was able to quickly check on his land and found electricity was back on.

Saskatchewan RCMP says Highway 55 is still closed from Meath Park to Prince Albert in both directions.

RCMP caution the public to avoid all major grid roads between Highways 55 and 355 because they are closed and being used by emergency agencies to transport water and firefighting equipment. Drivers are asked to use the alternate route of Highway 355 West at Meath Park and Highway 2 South.

Residents of the Cecil Ferry region can use the vessel to evacuate the area and access Prince Albert.

The road closures are expected to last till at least Wednesday evening.

Many fire departments are working on the fire. The province has additionally sent a helicopter, three waterbombers, a spotter aircraft, and additional firefighters.

The cause of the wildfire is yet to be identified.

Steve Roberts said there are 6 active fires in Sask., three of which are controlled.

Thus far this year, there have been 114 fires, which is just above the average of 93 fires, Roberts said.