Beaconsfield boy steps up to give along side Subban

After 7 year old Ethan Mercuri’s mom explained that one of his favourite hockey players, P.K. Subban, donated $10 million to the Montreal Children’s he felt inspired to do the same.  The Beaconsfield boy took $20 from his piggy bank and gave it to the cause.

Here is the letter he He wrote to go along with his donation:

“To P.K. Subban. My name is Ethan Mercuri. I heard that you gave $10 million  to the Montreal Children’s Hospital. And I want to do the same thing but less money,” he wrote.

“I want to give $20 from my piggy bank. If you want, you can come to my school at Beacon Hill Elementary. Hope you win the Stanley Cup. Your fan Ethan.”

Ethan inspired his little sister Mackenzie and many of his friends  to join the giving. According to Ethan’s mom, Tracy Petzke, several of his friends and family have matched the donation. 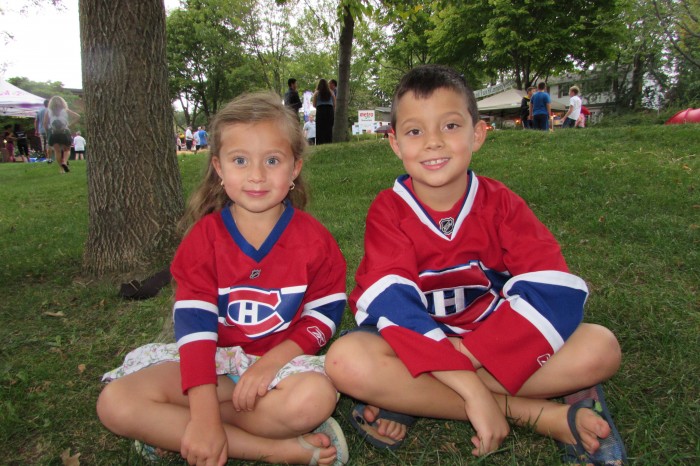 “I did it because my brother did it,” Mackenzie said, “I wanted to make the kids feel better.”

“On Monday Ethan will bring his letter to the school principal just in case Subban actually decides to visit,” Petzke explained with a big smile. “We have gotten a much bigger response than we expected.”

West Island Blog caught up with Ethan and his sister Mackenzie, wearing their Habs jerseys, at the annual Beaconhill corn roast yesterday.

“I did something for the kids and P.K. Subban,” Ethan said, “I thought it would be a nice thing cause there are a lot of kids that are sick.”

“My mom did a deposit online that goes to the kids. Things will be a little bit better.” he explained. “I inspired a lot of people, even people we don’t know,  so we can collect more money.”

“PK Subban has inspired young kids and one of the kids has taken leadership role and inspired other young kids, that is how it is suppose to happen,” Scarpaleggia said after speaking with Ethan. “It was so authentic from him. It was a gesture that was purely from the heart.”

Late Saturday night while Ethan was fast asleep he got Subban’s attention.  Subban tweeted to Ethan giving him props for stepping up. According to Petzke when she told Ethan he  did not say much but was grinning from ear to ear.

“It is wonderful that people will pick up on this and make a trend out of giving, it is the kind of spirit we hope to see coming from out of our young people,” Beaconsfield resident Ron Massad said.  “It lends to a hopeful future.”