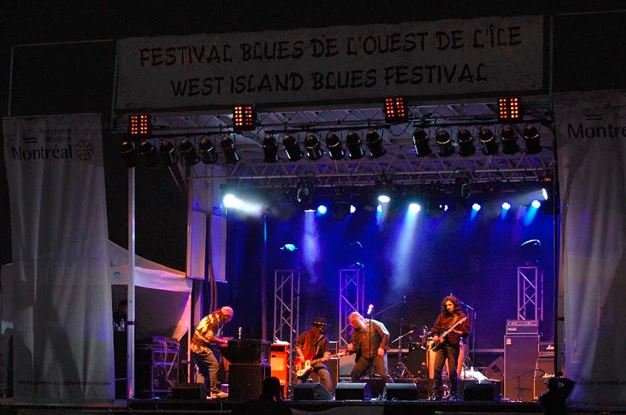 On the morning of May 7, 2019, a press conference was held to mark the launch of the 16th edition of the West Island Blues Festival at the Madison’s Restaurant & Bar in Dollard des-Ormeaux. All the members of the festival’s organizing committee were present, including Errol Johnson, President and Founder of the Festival as well as Mayors Jim Beis, Alex Bottausci & John Belvedere, as well as Benoit Langevin, Borough Councillor in Pierrefonds-Roxboro.

The representatives of major sponsors TD Bank & All-State Assurances as well as the members of organizations receiving the funds raised by the event were also there. John Belvedere, Mayor of Pointe-Claire, announced that the City of Pointe-Claire will join Pierrefonds-Roxboro and the City of Dollard-des-0rmeaux to become partners with the West Island Blues Festival.

Brian Greenway’s Blues Bus and Big J and the All Starz both offered a short performance.

A unique festival, the event has raised hundreds of thousands of dollars for non-profit organizations for fifteen years. This year, the organizations that will share the proceeds of the event are Alzheimer Group Inc., WIBCA, Literacy Unlimited, AJOI and the West Island Women’s Shelter.|

The festival is divided into two events. The first is a VIP evening that will take place on May
23 at the Pierrefonds Cultural Center. Tickets are on sale through the festival website or via its Facebook page at a cost of $ 100 each. Brian Greenway’s Blues Band will be the headliners for the VIP night and Deacon George will be the opening act. The outdoor festival will take place on June 15th. Viewers will have the pleasure of seeing the following bands perform: Deacon George, The Third Stone, Big J and the All Starz, Sylvie Desgroseillers, and finally Freddie James Project. For more information, please visit www.westislandbluesfestival.com.