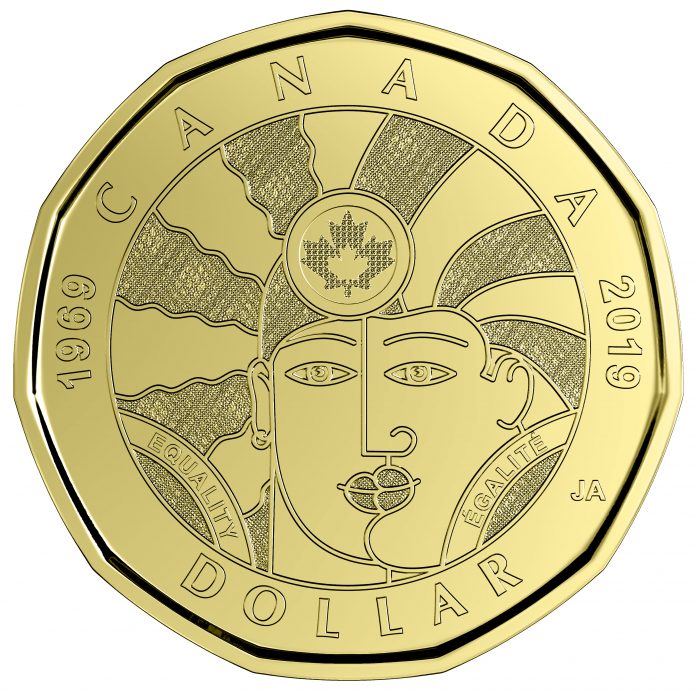 While Canadians’ are known for their strongly held values of diversity, inclusion and equality, for many years, LGBTQ2 Canadians were not treated equally. On Tuesday, April 23rd, the Royal Canadian Mint proudly launched a one-dollar circulation coin commemorating 50 years of progress in recognizing the rights of LGBTQ2 Canadians. It was a 1969 Act of Parliament that marked the initial milestone on the journey to equality for LGBTQ2 communities by decriminalizing homosexual acts between two consenting people of 21 years or older. The new coin, combining the words “EQUALITY-ÉGALITÉ” with the signature work of Vancouver artist Joe Average, starts circulating today. It was also launched through an official unveiling at the 519 Community Centre, in Toronto, Ontario.

“For the past 50 years and beyond, Canadians have fought for their right to love, marry, start a family and live openly as their most authentic selves,” said Bill Morneau, Minister of Finance and Member of Parliament for Toronto Centre. “The Equality coin recognizes their triumphs and encourages all of us to build a better, more inclusive Canada – because like the coin itself, the more equality we have in Canada, the richer we all are.”

“[This marks an] important day for the LGBTQ2 community, and for all Canadians, as this commemorative coin enters circulation,” said Randy Boissonnault, Special Advisor to the Prime Minister on LGBTQ2 Issues. “It is an opportunity to reflect on a landmark event in our country’s history, and a reminder of the progress still to be made as we work toward inclusion and equality for all LGBTQ2 Canadians.”

“The Mint plays a significant role in celebrating Canada’s culture, history and values through coins. Marking 50 years since a landmark decision that began a process of legal reforms to recognize the rights of LGBTQ2 Canadians is a powerful way to recognize Canada’s profound belief in equality and inclusion,” said Marie Lemay, President and CEO of the Royal Canadian Mint. “The Mint constantly strives to live these values, and our employees are proud to share the message of equality through this new commemorative circulation coin.”

Joe Average is a Vancouver-based artist whose early interest in drawing and photography led him to dedicate his life to his art when he was diagnosed as HIV-positive in 1984. The design he created for the reverse of this coin is a stylized celebration of equality viewed through an LGBTQ2 perspective. The image of two intertwined faces reflects gender fluidity and the spectrum of genders and is left open to interpretation: they may belong to two individuals or they may represent different aspects of one’s identity.

The reverse includes the words “EQUALITY” and “ÉGALITÉ” on two curved bands, as well as the double dates “1969” and “2019” to mark 50 years since the process of decriminalizing homosexual acts was initiated in Canada. The obverse features the effigy of Her Majesty Queen Elizabeth II by Susanna Blunt, in use on Canadian coins since 2003.

Limited to a mintage of three million, the one-dollar “Equality” circulation coin is now entering general circulation and will be available through several public coin exchanges to be announced soon (limited to Canada only).

These collectibles can be ordered by contacting the Mint at 1-800-267-1871 in Canada, 1-800-268-6468 in the US, or online at www.mint.ca/equality. They can also be found at the Royal Canadian Mint’s boutiques, as well as through the Mint’s global network of dealers and distributors, including participating Canada Post outlets.

About the Royal Canadian Mint
The Royal Canadian Mint is the Crown corporation responsible for the minting and distribution of Canada’s circulation coins. An ISO 9001 certified corporation, the Mint is recognized as one of the largest and most versatile mints in the world, offering a wide range of specialized, high-quality coinage products and related services on an international scale. For more information on the Mint, its products and services, visit www.mint.ca.