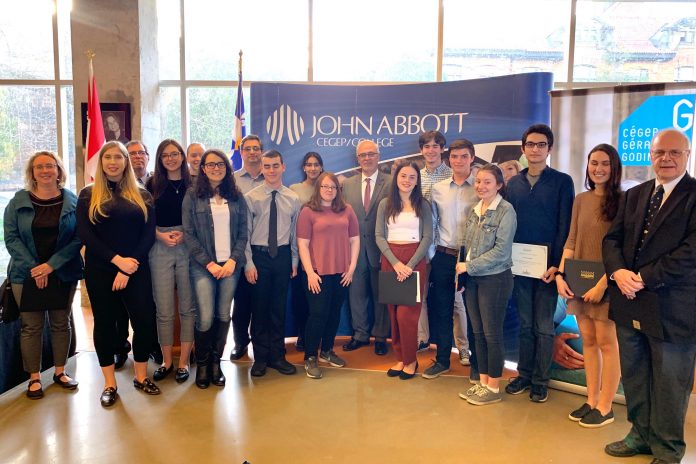 It is an urban legend that young people are completely disengaged from the democratic process. In fact, more than 20 students who attend John Abbott College and CÉGEP Gérald-Godin participated in the first edition of the MNAs’ Bursary, an essay competition organized by Mr. Carlos J. Leitão, MNA for Robert-Baldwin, Mr. Monsef Derraji, MNA for Nelligan, and Mr. Gregory Kelley, MNA for Jacques-Cartier. 6 outstanding writers, who distinguished themselves by the quality of their submissions on the topics chosen by the MNAs, were chosen from among the participants.

We would like to congratulate all 23 participants. All the essays we received were exceptional. It was difficult to choose the six recipients, who were each presented this evening with a $300  bursary. Bursary recipients include:

The goal of this competition was to solicit opinions from young people, with a view to allowing them to speak their minds and share their aspirations for a better world. ‘’This contest is a golden opportunity for student voices to be heard. It allows them to participate in public debate on issues about which they care deeply, and to help to develop a society that shares their values and ideas’’ declared Mr. Carlos J. Leitão, MNA for Robert Baldwin.

The MNAs were committed to ensuring that the voice of the next generation is heard. Mr.
Monsef Derraji stated, ‘’Not only are they Quebec’s future, but they already represent the voice of this generation. Listening to them is not only a privilege but above all a duty and a source of inspiration’’.

“To build a democracy that is alive with new ideas and that envisions a better future for us all, we need young people to share their experiences. Whether they are passionate about the environment, health care, education, or social justice, their opinions matter,’’ concluded Mr. Gregory Kelley.

This competition placed the MNAs in direct contact with grassroots realities and demonstrated to them that, contrary to popular belief, young people are well-informed, involved in causes about which they care deeply, and have strong ties to local stakeholders. Even more significantly, they have opinions to share on topics frequently covered by the media, whether those topics have a direct impact on their lives or not, and we congratulate them for their social conscience.