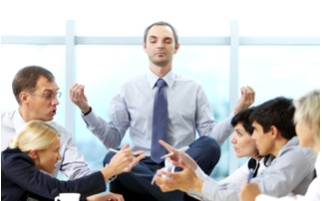 Montreal is a melting pot, just as many of our great Canadian metropolitans cities are. This translates into being confronted by various languages, ethnicities, beliefs and perspectives, among other aspects that contribute to our rich culture.  After all, a community’s ability to co-exist with its various members despite the differences between them is a good indicator of a thriving one.

The same train of thought applies to companies and organizations because a team’s ability to adapt to its member’s personalities, ways of thinking and working, is a great indicator of the organization’s success. That sounds great on paper, but in all actuality, it is easier said than done. We are all unique and unfortunately we don’t always get along with members of our team. However, there is model widely used to understand and explain how people learn and work.  David Merrill, education research in instructional design, gave birth to the social styles theory, with the objective of facilitating team work and conflict management. 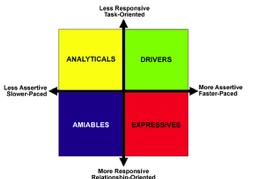 In addition, the model also presents four categories: the driver, the influencer, the supporter and the critical thinker. As we describe each of the socials styles, keep in mind that they are all useful, when and if used, with the right people and appropriately.

The driver is the colleague who is more oriented towards working with objects then people. This is an action oriented person whose favourite saying is “Just do it”. They prefer to be deep in thought then express their feelings.

This type of individual tends to be extraverted, assertive, efficient, time conscious and demanding. A colleague with a driver social style is often accused of being power driven and sometimes power hungry. Unfortunately, while this may not be their intention, their strong need to be in the driver’s seat and innate unemotional controlling character often hinders their reputation no matter how great they are at getting things done.

The influencer is the type of colleague who prefers people over objects. They tend to express their emotions more freely but can sometimes seek too much attention. As the dreamer and visionary of the team, their over enthusiastic attitudes can sometimes lead them to be impractical. However, their creativity and intuition allows them to influence others in such a way that their demands are often met.

The supporter is definitely relationship oriented and therefore prides them self on being personable, warm and friendly. When faced with a challenge, this type of colleague will give more importance to feelings over facts and although they ask a lot of questions, their main purpose is to empower the other party. Security minded, a person with a supporter social style won’t be a big risk taker as they prefer to align themselves with the majority of the group.

The critical thinker is the type of colleague who is analytical, focusing on facts, stats, details, references and numbers. However, they have a strong need to be right and they will often use their logic to coerce you into agreeing with them. A person with this social style is often perceived as unemotional, cool and detached.

Take the time to Understanding each team member’s style

If we are able to describe each social style, then we are equally able to identify our own and that of ot 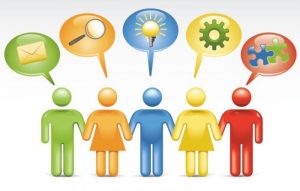 hers in our workplace. This will in turn allow us to adjust our own style to better communicate and collaborate with individuals whom differ from us. After all, the main goal is to work collaboratively and effectively.

It is important to remember that each style has its strengths and weaknesses as well as people often fall within two categories. The secret is in leaning to adapt ourselves.

Let us look at a concrete example as to how you can use this valuable information.

My colleagues and I work with a large number of business owners and their management team each year. In one case the owners had identified the manager as the key problem in their organization. So after discussion it was agreed that we would work one on one with the manager to address their leadership style. Before we launched the mandate we asked the manager to complete an assessment. The report provided us both with an insight into the personality profile and important work related characteristics in three areas. Aptitude, Motivational interests, and Personality. What we found was that the manager was well balanced across the three areas and had the qualities of a good leader. We launched the leadership coaching mandate and over a period of one year many positive changes were made and implemented.

As we neared the end of the development program we discovered that an important disconnect continued to exist between the manager and the owner. The only way to resolve this and move forward was for the owner to complete the same assessment the manager had completed prior to the launch of the leadership mandate. The results came out as we suspected. The owner had significant imbalances that needed to be corrected. The owner was undermining the manager and not providing the support and latitude need to ensure success. The owner had an analytical /Driver personality that included traits that were overly diplomatic, submissive, introverted and excitable. So when the employees criticized the manager the owner would take their side and then use that information to criticize the manager who was doing the job correctly.

Once we shared the results of the assessment with the owner and held a series of sessions with the owner along with some setting of goals we were able to correct the unproductive behaviours. Awareness is the start of any process and that is the beauty in the differences and something to appreciate.

As always feel free to share the information with business owners you know that will benefit.

We welcome feedback and the opportunity to share more Results focused ideas with you.