West Island Palliative Care Residence, this morning was presented the Meritorious Service Cross (Civil Division) by His Excellency the Right Hon. David Johnston, Governor General of Canada, at a ceremony at Rideau Hall in Ottawa.

The prestigious decoration was presented to recognize her contribution to palliative care in the West Island community, as well as her acknowledged leadership role in the field throughout Canada. With

Co-Founder Russell Williams, she was the driving force behind the creation of the West Island Palliative Care Residence, which opened its doors in 2002, and has been and remains its sole Executive Director.

“This is an extremely well-deserved honour for Teresa, who is the heart and soul of the West Island Palliative Care Residence and everything it does for our community,” said Val Pietrantonio, President of the Operations Board of the Residence. “It is a wonderful tribute to her vision, her determination to bring that vision to reality, and her commitment to continually enhance the care the Residence gives those who seek comfort and fulfillment in their final days. The award also speaks to the very high regard in which she is held by the palliative care community throughout Canada. We couldn’t be happier than to see her work recognized in this prestigious way.” 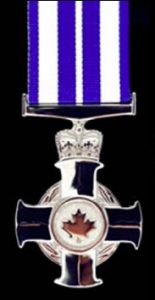 The citation for the decoration presented by the Governor General says: “Social worker Teresa Dellar co-founded the West Island Palliative Care Residence in 2002, the first facility in Montréal to offer end-of-life care in a residential setting. Her passionate leadership as Executive Director has resulted in stable funding for the non-profit foundation and a large expansion of the residence. The model of holistic care she created for patients and their families is now used in facilities across Canada.”

The Meritorious Service Decorations were created by Queen Elizabeth II to recognize Canadians for exceptional deeds that bring honour to our country. The cross was originally created in 1984 for members of the military. In 1991, a medal was added to the military division, and both the cross and medal were introduced for civilians.

The Meritorious Service Cross for civilians is described as recognizing “a deed or an activity that has been performed in an outstandingly professional manner, or with uncommonly high standards; the activity is often innovative, sets an example for others to follow, improves the quality of life of a community and

brings considerable benefit or honour to Canada.” Recipients are entitled to place the letters “M.S.C.” following their name.

The decoration itself is described as “a silver Greek cross, ends splayed and convexed, bearing the Royal Crown: on one side appears a maple leaf within a circle and a laurel wreath between the arms, and on the other appears the Royal Cypher, and within a double circle the inscription MERITORIOUS SERVICE MÉRITOIRE.”

The West Island Palliative Care Residence provides terminally ill patients with a place to spend their end-of-life days in comfort and dignity in a warm, home-like environment, close to their family, and in their community. The freestanding Residence, which is the largest such facility in Canada, provides a special type of care for terminally-ill people to live out their final days in comfort and dignity. Recognized across the province and Canada for its excellence in palliative care, the facility has welcomed more than 3,500 patients in the final stages of ALS, multiple sclerosis, cardiovascular disease and cancer, as well as their family members. To learn more, visit PalliativeCareResidence.com.