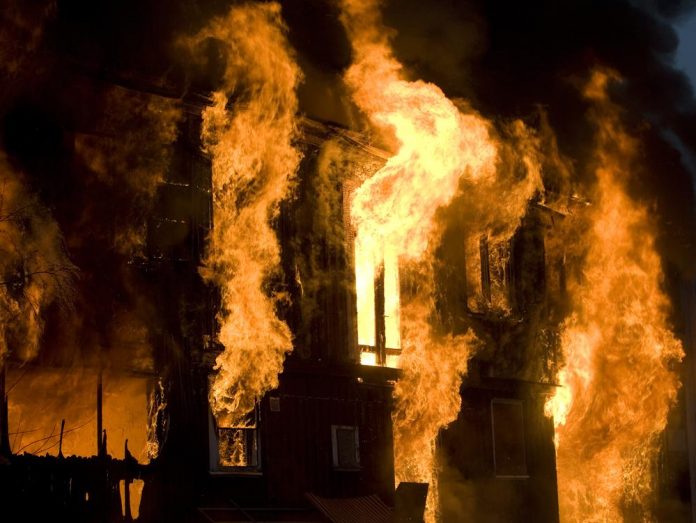 Tens of people are now homeless after a huge fire ripped through an apartment building in Abbotsford during the night.

Crews were called to Delair Road about 1:30 a.m Sunday.

“On arrival, they had fire rolling up one side of the building and the roof beginning to start involvement,” said Ron Hull, assistant fire chief with Abbotsford Fire Rescue Service. “Very shortly after that, we had fire rolling along the entire roof, helped along by the wind.”

He described flames soaring “20 or 30 feet in the air.” The fire was so intense; it took every firefighter in Abbotsford to extinguish it.

Thus far, fire investigators have not determined what caused the blaze, and no injuries have yet been reported.

Inhabitants of almost 60 units were evacuated onto the street in sub-zero temperatures, and those residing in the opposite building were also asked to vacate.

John Brackett lived on the top floor, and he said he and his 8-year-old son were asleep when his wife smelled smoke.

“She then proceeded to open up the door to the hallway and saw smoke billowing out of one of the suites,” he said. “It was the most terrifying thing that’s ever happened to me.”

Martin Fontaine and Julie Bratkowski were on the top floor too, and they were woken up by the smoke alarm.

“Just jump out of bed and go,” Fontaine said. Bratkowski said that they managed to run with just the clothes on their back.

“I have nothing,” she said. “Our whole place went up in flames. I don’t even have my rings. Nothing.”

Residents of both apartment buildings were taken to a nearby church to warm up. Members of the Red Cross and Salvation Army organized McDonald’s and Tim Hortons run for them and assisted in making hotel arrangements.

On Sunday 14, fire crews were cautiously going through the building in search of pets. They managed to find 5 cats left behind, though Brackett said that one of his was still missing.

Hull said the main building is severely damaged that “no one will be going in again.” Those who have lost their homes will be staying in a hotel for a couple of nights, though they will need to make other arrangements thereafter.

“We’ve had some friends reach out and whatnot, but my wife and I have to sit down and decide what we’re going to do,” Brackett added.

Fontaine said he and Bratkowski may reside in an RV for some time.

All residents who talked with CTV News say they’re grateful everyone is fine.

“When you think about what you had and you don’t have it anymore, but at least we have each other and that’s all that matters,” Bratkowski stated.