It was an active week for West Island Community Shares (WICS). They started the week off with their annual BMO Thanks Giving Dinner. The party started as soon as the guests arrived. Sitting down was not the mandate of the event with DJ George Thomas as emcee, despite the delicious turkey dinner. The event raised more than 55,000 for the 41 community groups cherished by the WICS team. 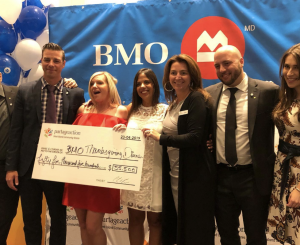 The week with WICS got more and more exciting as the days went by. For the first time benefitting WICS, Sugar Sammy graced the West Island with his hilarious comic performance. The show kept the audience entertained for more than an hour with provocative looks into politics, culture and social themes. The master spent a great deal of the show interacting with the audience, in particular, the 22 Zac-Tranz employee who took over the first row of seats.

A little about Sugar Sammy

According to Mount Royal University, in addition to his success in Canada, Sugar Sammy’s star power continues to grow exponentially in France and the U.S. He won “Best Comedian” in the Le Parisien magazine’s prestigious countdown of 2018’s hottest performing arts and television stars in their annual Les Étoiles du Parisien show and will return to the judges’ panel for season 14 of La France a un Incroyable Talent (the French version of America’s Got Talent), one of France’s most popular TV shows, with ratings averaging 3.5 million viewers an episode.

West Island Community Shares is a charity dedicated to building a strong, resilient, peaceful and healthy community. We do this by raising funds for 41 local community organizations with the help and support of caring citizens, corporate partners and donors with a big heart. Since 1998, it has raised and distributed more than $12 million to local community groups.