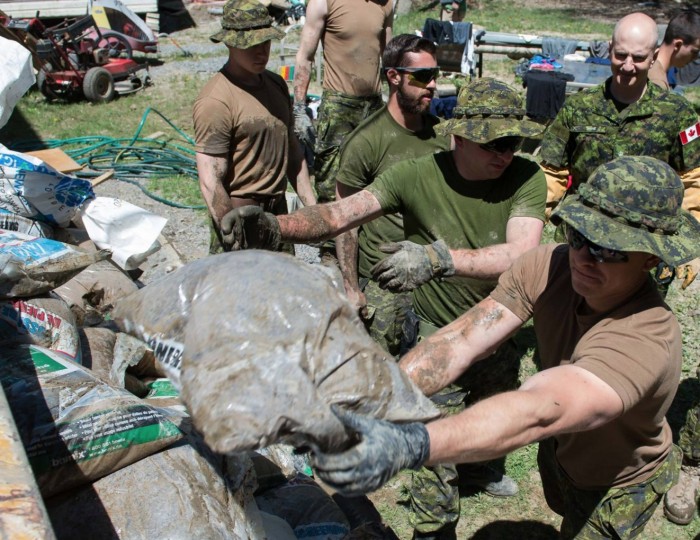 About 150 homes were saved from the waters after a dike gave way, leaving a gap of five feet in the dike, in Pierrefonds on Tuesday.

More than thirty men from the armed forces went to the scene of the incident to seal the breach with new sandbags.

Blue-collar workers from Pierrefonds joined the armed forces to solidify the structure that they hope will hold for the next several days.

That was not the only dike that had issues.  An Ile Bizard dike also suffered a break in the sandbag lineup on Tuesday night but this breach was due to stolen sandbags.

“It’s one thing to walk around taking pictures of people in a crisis it’s another thing to STEAL BAGS FROM A DIKE! Stop, just stop, now!! ” posted Volunteer coordinator for Operation Flood 2019, Sabrina Maryse. “You are putting your life and the life of others at serious risk. What is wrong with people? We have 10 million bags on site, why would you do this? We are elevating security on Jean Yves, and delivering multiple loads of sand bags in case this is an act of desperation. We are making the repairs but can’t continue this every night!! Please stop doing this, as your stupidity and wreck less behaviour can have dire consequences. Did people not see what just happened in St Marthe? This will flood all the streets we worked so hard to protect. People have enough to worry about trying to save their homes. This is wrong on so many levels.”