For the next three years Sainte Anne de Bellevue will be raising the bar when it comes to accessing the extensive activities available in the city.  The initial role out was announced at a press conference last week where Mayor Paola Hawa and her team explained the new summer activity program and the nine stop shuttle service that will be available to all that want to use it.

Sainte Annes is known for it’s water’s edge local food market that will open up outside on May 7. The town is also known for its quaint village nestled at the edge of the Island of Montreal.  But according to the Mayor the extensive activities that are available are not as well known as one might think. 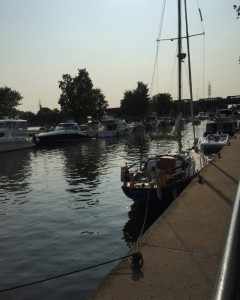 “You would be surprised to learn that most people do not know how much we have to offer in our neck of the woods,” Hawa explained. “There is no place that offers a nature walk in a 245 hectare nature park, a zoo, an aviation museum and a waterfront village all within a seven minute driving distance.”

The shuttle service will be free and operational on both Saturdays and Sundays through the summer period from June 25 to September 11.  The shuttle will have nine stops, John Abbott College, the Ecomuseum, Morgan Arboretum, McDonald Farm, back to John Abbott, Kelso park, Lalonde park, City Hall, Les Écluses under  the Galipeault bridge.

“This will make parking easier when things get into full swing in the summer months,” Hawa said, “families can park at John Abbott and take the shuttle with strollers to any of the activities available.”

Since the City wants to make it easier for visitors to organize their getaways, there will now be tourist guides on the boardwalk along the canal who can answer questions and provide suggestions.  In addition, visitors can consult a brochure describing all the events and activities.