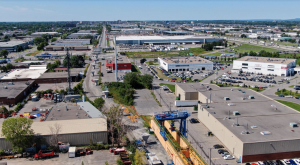 In July, Anne’s passage over Saint-Charles Boulevard has certainly captured the attention of drivers who have passed under the prefabricated segments attached to the gantry. It is impressive, because it is the first time that we have used launching gantries in Quebec. It is important to remember that this working method is safe and proven. Road traffic is restored during the day under the segments, once these are attached to the launching gantry, while the works are carried out at night; it is therefore a particularly effective method for limiting the impact on traffic. Drivers must not be distracted by Marie.

As a reminder, on average, it takes two days to erect one span, that is, the distance between two piles (about 40 metres). This method greatly reduces the impacts, as the construction of such a span could take up to three weeks with a traditional method. Two launching gantries are used to build the Réseau express métropolitain’s 14.5-km elevated structure of the Airport and Sainte-Anne-de-Bellevue branches.