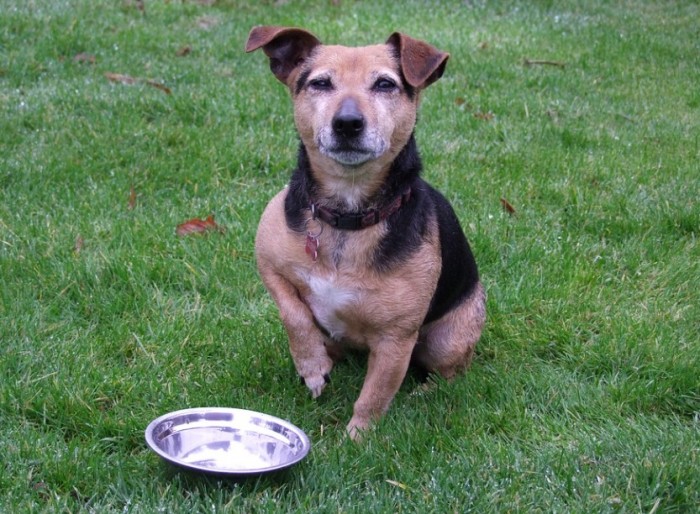 I have been a vegetarian since before you were born. It’s my penance for choosing a profession that brings death and illness too frequently to my doorstep. I don’t wear it as a badge, I don’t proselytize and I don’t feel an ounce better than my meat-eating neighbours for it. I bring it up now only because I think those 50+ years of declining to kill anything for personal gratification entitle me to pen this.

Perhaps you made that choice as well – if so fine and good and welcome. But your dog or cat’s anatomy, history, nutritional needs and, most importantly,  are not the same as yours. I want to take some time to talk for them now and tell you the things they would tell you – if they could. Perhaps they did tell you but you just weren’t listening.

Are You Going To Tell Me That One Can Not Construct A Vegetarian Diet For My Dog or Cat That Will Meet Its Nutritional Needs ?

Pet food manufacturers are not ones to leave a potential source of revenue untapped. They know that ~ 5% of Canadians, ~2.5% of US Americans and ~4% of the UK are vegetarians and that most of them have dogs and cats as pets. They know that most of those folk are well educated with substantial disposable income and that many are motivated to consider feeding their pet a diet that contained no animal ingredients. However, they still have a long way to go, the majority of the no-meat pet foods on the market are deficient in vital nutrients.  The danger of carbohydrate glut and potentially hazardous additives is also ever-present.

When the motivation is high profits, as in specialty pet foods, most anything is achievable through manipulation or slight-of-hand and most any claim can be made to the public. Chemists can synthesize just about everything in today’s plastic world – or cook up an approximation in some flask using trained (genetically-engineered) microbes (eg the amino acids, lysine and methionine) – or produced it from toxic petrochemicals (eg methyl mercaptan-propionaldehyde ) = a genetic engineered,  soylent green brew.

So What’s Your Beef With Me Feeding My Dog Or Cat A Plant-based Diet Anyway ?  That’s So Uncool Of You !

I am less concerned whether you can successfully vegetize your pet than whether you ought to. A lot of morally repugnant things can be done without negative health effects. The problem is that doing so is a form of animal cruelty – a deprivation of a unique animal soul that loves and trusts you – done to satisfy ones own selfish ego.

Look at your cat or dog’s teeth. Whoever or whatever you exalt, created them for a purpose – to consume their prey. No one can tell you why that is, no one can explain why predatory and prey are fundamental elements of Nature and no one can justify it – certainly not I.

Would an animal designed to eat meat be repulsed by meat or would it crave meat?  How about a vegetarian animal like a cow? How might it feel if you offered it meat rather than hay? Might it be able to survive on meat? Perhaps. Might your dog or cat be able to survive on plants? Perhaps.  Would it be humane or compassionate to do either? Would it be an act of love or of selfishness to force either animal to consume what is not in their nature? Might vegetization of carnivores be a simplistic solution to a misstated problem – a creepy experiment to satisfy ones own personal vanity? Is it any less a form of animal abuse than this one ?

India has more vegetarians that the rest of the world combined (~38%?). But their motivation is quite different from yours. They see vegetarianism as a form of ritual cleanliness and purity – not as a social justice moment as most Western vegetarian/vegans like you do. Animals can be exploited in various ways – used for food, used for draft or clothing – wagered upon in bull rings and cock fights – paraded before the public for their amusement. But is vegetization of a dog or cat any less of an exploitation of animals? In my mind it is no different than the more traditional form of animal experimentation and exploitation.

In my mind, it is worse than most because nothing good can come of it. No one will have learned anything that might benefit one dog,  one cat or one human being.

How Did We Get Here ?

The process that got us here began long ago, as an offshoot of intensive animal agriculture. That was when pet owners were first told by big feed and slaughterhouse corporations that it was OK to feed a baked “chow” or kibble pellet to their dogs and cats (re Purina Mills) and when the big Chicago slaughter houses found canned dog food a convenient way to dispose of their waste. Once pet owners bought into that, it became acceptable to feed dogs and cats products that had no relationship whatsoever to what dogs and cats had consumed for millennia. Once you no longer believed that your dog or cat needed its natural diet or even remembered what it was, it was only a small step farther to suggest that they could prosper eating most anything.  Animal protein (meat) is more expensive then plant protein. So those corporations, God bless them, found it advantageous to get you to believe that there was no difference between the two and that pets were mindless cartoon creatures that could be fed the same nondescript slop day after day, year after year. It was forgotten that taste, mouth feel, variety, chewing and gnawing for dental health and variety for an enriched environment were of any importance. Aiding them was our migration to the cities, our day-to-day separation from Nature and the two-worker family. When folks got home, they no longer found the time to cook for their pets. They need to hurry up to get online, or click on the tube to be banfielded with pet melodramas. The pet food companies, dodgy vegan lines included, were quick to pat you on the back and say with phony sincerity, “Don’t Worry, its OK”.

Well, I Read Some Where That A Dog Lived To Be 189 Dog Years Old On A Vegan Diet

You can choose to believe that. Feeding a diet of rice and lentils might actually extend a dog or cat’s life – through partial starvation (caloric restriction) and a chronic methionine deficiency. But to me, providing a pet with a life filled with contentment and pleasure is far more important. An exceptionally long life has nothing to do with a happy life. (Besides, Ripley’s Believe It Or Not and the Guinness Book of Records are not where one goes for wisdom.)

Besides chronic starvation and amino acid deficiencies, you can extend an animal’s life just as effectively with near-toxic doses of rapamycin or resveratrol. None of these manipulations – from lentils to chemotoxic compounds for dogs and cats appeal to me – and hopefully not to you either.

How Dare You Write Things Like That ! Everyone Knows We Vegetarians Love Our Pets More Than Meat Eater’s Do.

You can find plenty of folks that claim that – they even appear in half-baked, fee-based “Scientific” Journals. Those “studies” are invariably written by vegetarians who ask other vegetarians if they believe that they love their pets more than meat-eaters do.

Your job is to love and protect your pet and to satisfy its emotional needs. To accept it as God made it, not as you might wish it had been made.  My job is to try to understand their physical and psychological needs. You may be vexed about why the World is as it is – so am I. But don’t take that out on your pets. Don’t make them suffer for something they had nothing to do with. You cannot right a wrong with another wrong. I know you are conflicted or you wouldn’t have read this far; but don’t make your pet suffer to solve your moral dilemma.

PETA and other professionally indignants will question my sincerity and veracity – they might remind you that I am “controversial”, that my veterinary association, the AVMA, and the Texas State Board, do not like me. They might tell you that I am morally “impure” because I have worked within the research community of the National Institutes of Health (where animal experimentation is common) and in the animal entertainment business. They might tell you that I do not universally condemn the declawing of cats. All of that is true and could be a useful diversion from the question at hand.  Those sort of vegetarians hold rigid, lock-step opinions and, like all totalitarian ideologies, have an inclination to book-burning and worse when one’s conclusions do not toe the Party Line. Few of them will have bothered to read this and fewer still to consider if political correctness and self-centered egotism rather than empathy and universal love for animals motivate their suggestions on what you should feed your dog and cat. If a single pet owner is steered away from the abomination of vegetizing my beloved carnivores, it’s been worth the time it took me to write this. Thanks for reading.