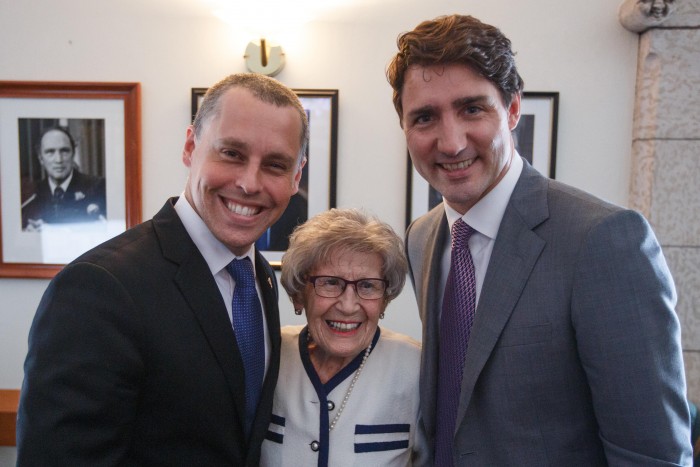 For the 150th Anniversary of Canadian Confederation, the Right Honourable Prime Minister, Justin Trudeau, and the Member of Parliament for Vaudreuil-Soulanges, Peter Schiefke, awarded the first of four Sesqui Awards for Lifetime Contribution to Mrs. Maxine Bredt. This distinction is awarded to a constituent who, throughout their life, embodied and exemplified the spirit of community service with dignity and integrity. Three other recipients will be announced throughout the summer.

The Sesquicentennial Pin is a historically rich symbol that features both the Canada 150 emblem and a layer of green copper which once covered the roofs of Canada’s Parliament Buildings from 1918 to 1996. These special and invaluable pins, made in collaboration with the Ottawa-Carleton Association for Persons with Development Disabilities, have small visual differences that are unique to each one, signifying the importance of the recipient’s personal contributions to our society.

Mrs. Bredt was born in British-Columbia, Canada, and became a nurse at the Victoria’s Royal Jubilee Hospital. She joined the Canadian Army Medical Corps of the Canadian Armed Forces, becoming a Lieutenant Nurse as one of 4480 Nursing Sisters of Canada from 1944 to 1946. Her years of service during the Second World War brought her to Italy and England, where she treated Allied troops as a surgical nurse on the most hostile battlefields of Europe.

Since then, her determination to help others has not stopped. Mrs. Bredt has devoted herself to helping fellow veterans, notably by volunteering at the Sainte-Anne’s Hospital. She is a dedicated member of the Royal Canadian Legion in Hudson, Branch #115, and takes part in various community events.

Not only has Mrs. Bredt received numerous military distinctions for her heroic service, but she has also been awarded the Minister of Veterans Affairs Commendation, the Lieutenant Governor’s Medal, and was honoured by Pope John XXIII in 1959. In addition, she has been awarded the Queen’s Golden and Diamond Jubilee Medals and has been invited to participate in the World War One and World War Two commemorative services across Europe.

“Maxine Bredt has devoted her life to others and she continues to work hard to improve our community and our country through her devotion to our veterans. It is a great honour for me to be able to highlight the incredible work of an exceptional, one-of-a-kind woman.” – Peter Schiefke, Vaudreuil-Soulanges, Parliamentary Secretary to the Prime Minister for Youth