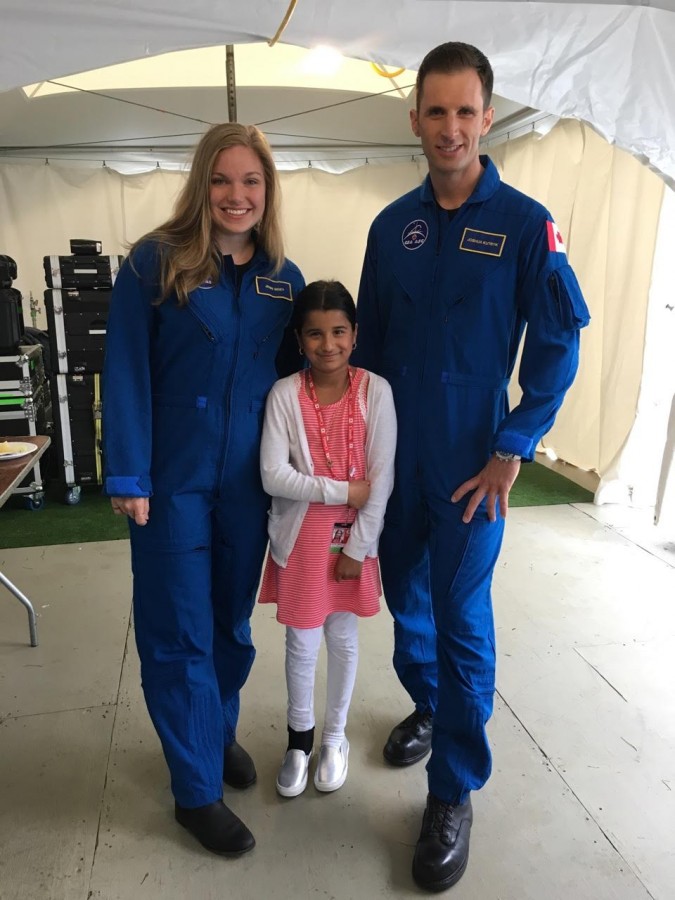 At only 9 years-old, Sahana Khatri from Vaudreuil-Dorion participated in the Canada 150 celebrations in Ottawa last Saturday. To encourage her to pursue her passion and reach for the stars, the Canadian Space Agency invited her to Parliament Hill where she took part in the announcement of the two astronauts selected, Jenny Sidey et Joshua Kutry. The announcement was made by Prime Minister Justin Trudeau with Minister of Innovation, Navdeep Bains.

In July 2016, Sahana Khatri showed determination by applying to the Canadian Space Agency’s astronaut recruitment campaign. She sent a letter to Minister Navdeep Bains by delivering it to her MP, Peter Schiefke. Sahana wanted to put all chances on her side by applying early. The video capturing her reading the letter to MP Schiefke went viral last summer and got a video response from Minister Bains on Facebook.

“For a long time, I wanted to be an astronaut. I have always been interested in space. With my parents, I visited the Montreal Planetarium where I learned about constellations and that Mercury is the closest planet to the sun,” she read. She then shared how for her eighth birthday the theme was all space-related with rocket fruit skewers and planet-shaped cake pops. “I love math, doing experiments and I am curious. That is why I could become an astronaut. I would love to meet an astronaut or visit a shuttle. I think the Canadian Space Agency should recruit me now so I can prepare so I can be ready when I will be big enough to go in space. Thank you for reading my letter and for helping me become an astronaut. I hope you like my astronaut birthday pictures,” she concluded her application letter with.

“Sahana showed maturity beyond her years on Saturday. She was calm and collected on stage with Shania Twain, explains her mother Jasmine Sharma with pride, but she especially appreciated spending time with the astronauts and her experience backstage where we took a lot of pictures.”

Asked what was the most memorable part of her experience, Sahana said: “I am really happy I got to sit with the two astronauts in the car ride to the show because I got their autographs in my Chris Hadfield book.” She also added that “Shania Twain is really nice and Minister Bains took a selfie with my dad but also came back stage to take a picture with me after the show!”