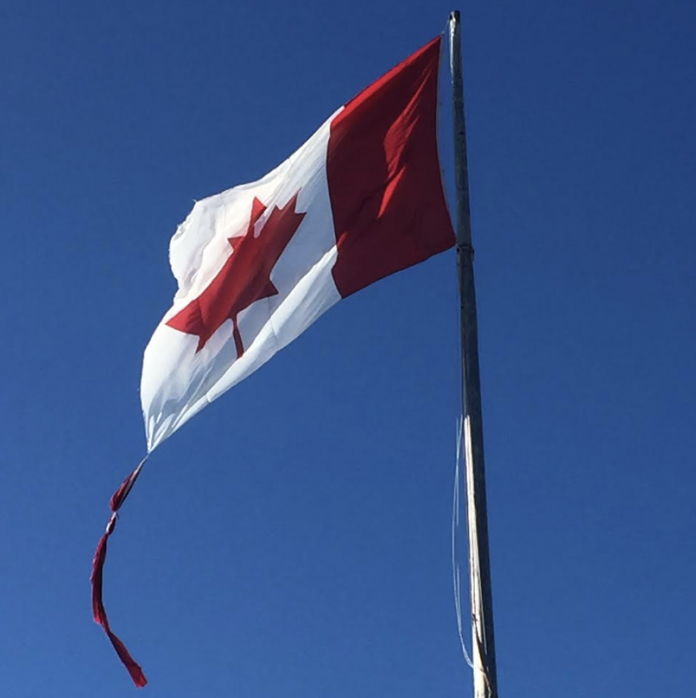 “We are aware of the condition of the flag at Berthold Park,” said Assistant to the Mayor and Public and Community Relations Coordinator, Susan Stokley. “The problem is that the pole is not fitted with a mechanism to readily change the flag and the pole is too high for a bucket to reach. In the past years, the only way for the flag to be changed was for the owner of the company to courageously climb the pole manually.”

The flag pole made out of a 463-year-old Columbia fir stands at 100 feet making it difficult for flags to be replaced easily. It became part of the Town’s Canada’s Centennial Project when the Town received one of the longest timbers ever seen in the area for erection as a Centennial flagpole.

“As of this year, this gentleman can longer provide us with this rare and exceptional service and no other company will do this because of the safety issue,” she explained. ” The Town is looking into another solution which is either find a way to install a mechanism or replace the pole, both of which can’t be done until the weather gets warmer.”

The pole was 115 feet long, 7 inches in diameter at the top, 23 inches at the bottom and weighed 2.5 tons. It traveled from BC to Ontario via CP Rail and then to the Town via CN.

“This winter was harsh on the Town’s infrastructure, including its flags,” stated Stokley. “We are anxiously awaiting the spring weather to safely replace the current flag and future ones.”