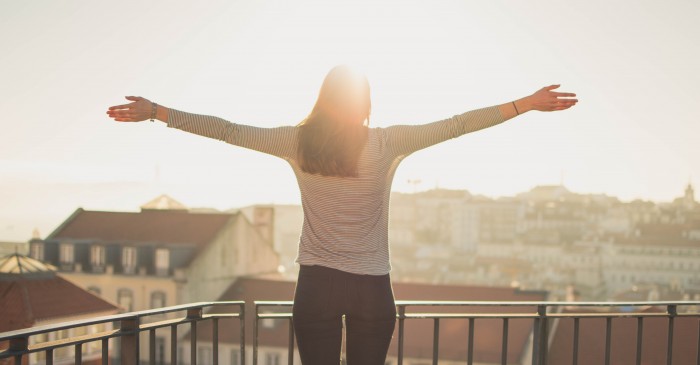 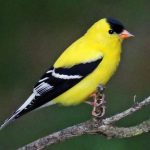 The next morning the same ticking sound happened again.  This time I got out of bed and went to investigate where the sound was coming from.  I found a gorgeous bright yellow bird perched on my window’s ledge.  The bird was tapping the bathroom window glass with its beak.  As I approached the window to see it more clearly, it flew into an evergreen tree which is situated right in front of the window.  I was still able to see it, just not that closely.  I smiled at the sight of that stunning yellow bird.

I have cardinals which live in my backyard.  I see them almost daily.  The male is easy to find with his bright red feathers and distinctive voice.  The female cardinal is harder to find as her feathers are more peach in colour.  These cardinals live and nest in my trees. I have also seen many red-breasted robins and this year I even saw a young falcon! However, I have never seen such a beautiful yellow bird before.

My backyard is also home to raccoons, skunks, squirrels, mice, the occasional groundhog and most recently a rabbit! I’m sure most backyards in Montreal have the same animals running through their properties.  I live in boreal Canada, ya know!

I took a few pictures of the beautiful yellow bird.  Then I went online to try to identify it.  I looked up, the “Guide to North American Birds” at  www.audubon.org/bird-guide .  It was there where I was able to identify this bird as an American Goldfinch.  I also learned more about the bird and its habits.  The more I read, the more I was intrigued.  I read that a male American Goldfinch is not usually alone and I should look for the female Goldfinch.  The female has similar markings, but a softer yellowish colour.  I looked for her, but I couldn’t find her. 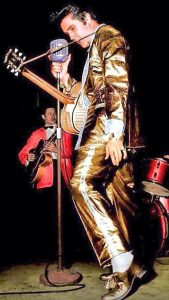 The next morning, I was once again awoken from a ticking sound on my bathroom window.  This time I jumped out of bed because I knew who it was!  My little friend the American Goldfinch who I named Lamé.  I gave him this name after the yellow gold lamé suit Elvis wore on tour in 1957. For reference, please see the pictures. Here is a little Elvis fun fact:

On March 28, 1957, Elvis wore the gold lamé suit for the first time in public at the International Amphitheatre in Chicago. However, during his concert tour in the US and Canada, he only wore the full suit a few times. For most of his 1957 performances, Elvis substituted black pants for the gold. He still wore the gold belt and jacket, but rarely wore the gold shoes or necktie. As he explained to a Vancouver DJ in 1957, he stopped wearing the gold pants since the creases were not flattering.

On this morning, I was so happy to see Lamé.  He made me smile.  Then I remembered to look for the female.  I waited and watched and sure enough, she appeared!  I had both Lamé and Laurette perched on my window, ticking against the glass. I felt so happy to see them both.  I sat and watched their behaviour for a while.  I was also looking for their nest within the evergreen tree.

I also remembered a thought I had last year.  I wanted to cut down the evergreen tree due to the fact it was severely blocking the natural light and growing very high.  It’s a good thing I didn’t cut it down… it’s someone’s home!

This whole experience came together for me the next morning.  Once again, I awoke from the ticking sound on my bathroom window.  This time I was pleasantly greeted by both Lamé and Laurette.  I watched them and I’m sure they were watching me.  I love their company.  It makes me feel happy.  Such a little random occurrence can be so wonderful.  It’s those little things that are usually the most delightful. Grand jesters are grand and amazing, but it’s the little things that are so daintily special.

I hope that Lamé and Laurette will keep coming to visit me with their ticking on my window. I will provide them with some bird feed to encourage their return.  I hope one day I will find their nest within my evergreen tree filed with their offspring.  I have so much more to see just outside my window.

It’s out there somewhere, you just have to find it…or … it will find you! 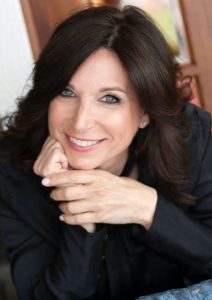