In an effort to recover a stolen parcel for their son Ben, Mike Pelle and his wife Melissa Rosen posted the video of the thief in action to several Facebook groups including Beaconsfield Neighbours for Neighbours.

“Does anyone know this man?,” Rosen posted to her Facebook page. “He just stole the birthday present for my son that was delivered to my house today? His birthday is tomorrow and now he won’t have a gift for his 2-year-old bday 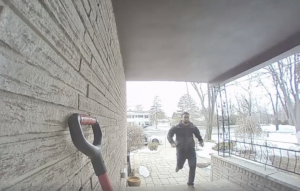 “I spoke to the police today,” Pelle told West Island Blog in an exchange, “they told me the man in question was arrested for something unrelated. During the arrest, they found several packages. We hope one of them is ours.”

The family has a wireless video doorbell that has adjustable motion sensors that send an instant alert when someone rings the doorbell. When the user answers the alert, they can see, hear and speak to visitors from anywhere. They can also share the video in an event such as this.