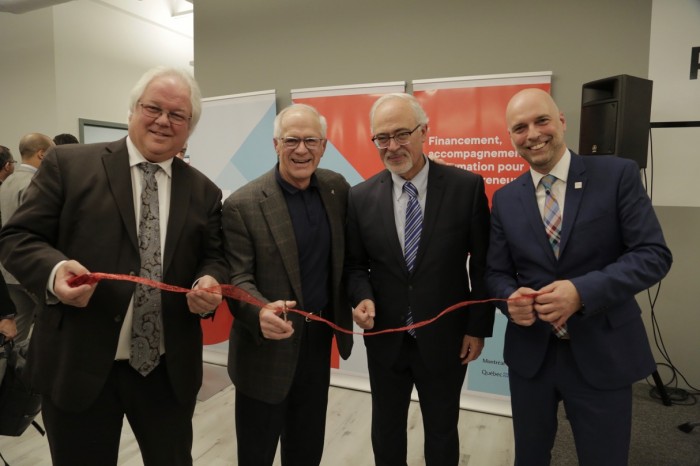 Close to 140 guests attended the grand opening of PME MTL West-Island’s new offices on November 20th, 2018. This special event included entrepreneurs, partners, members of the board, mayors and counsellors of West Island cities and boroughs, as well as several provincial and federal elected officials.

The official ribbon-cutting was presided over by the Mayor of Dorval, Mr. Edgar Rouleau, the Chairman of the board, Mr. Roger Morin, the Executive Director of PME MTL West-Island Nicolas Roy, and the Deputy for Robert-Baldwin and Official Opposition Critic for Finance for the Quebec Liberal Party, Mr. Carlos J, Leitao.

Guests not only got a chance to visit the new working spaces of PME MTL West-Island but also had a wonderful opportunity to rediscover the free services offered by this economic development agency to entrepreneurs on its territory.

About PME MTL Network
The PME MTL network, comprised of six service hubs, offers support, financing and training for entrepreneurs, to accompany them in launching and growing their businesses on the Island of Montreal.

The experienced, thoroughly knowledgeable PME MTL experts are devoted to ensuring the success of all business ventures, be they for-profit or part of the social economy. Whether you need advice on finalizing your business plan, seeking financing, management issues, recruiting or mentorship, our advisers are there for entrepreneurs and to support businesses at every step along the way.

PME MTL acts as a true catalyst in developing entrepreneurship, working hand-in-hand with a vast network of partners and bringing together entrepreneurs with different experts, stakeholders as well as financial assistance and program managers.

It all makes PME MTL the largest network of experts serving Montréal entrepreneurs.