with files from Kevin Woodhouse

For West Island residents in Dollard-des-Ormeaux, Pointe Claire, Lachine, Dorval and parts of Kirkland, community mail boxes are now the norm as home delivery has stopped in those municipalities as of Monday morning.

After Coderre’s  photo op was done last Thursday, a back hoe finished up the job in short order.  By the time the Mayor headed back down town there was little evidence that Canada Post had been to the site.

“I will be sending the bill directly to Canada Post,” Coderre told the crowd of reporters speckled with politicians and residents. “Enough of the bullshit.”

The site was originally chosen at the entrance of the park because, according to Anick Losier of Canada Post, “that site had fit the safety criteria for the surrounding neighbours.”

Pierrefonds Mayor Jim Beis told reporters last Thursday that “the installation was done prior to receiving notice from Canada Post. 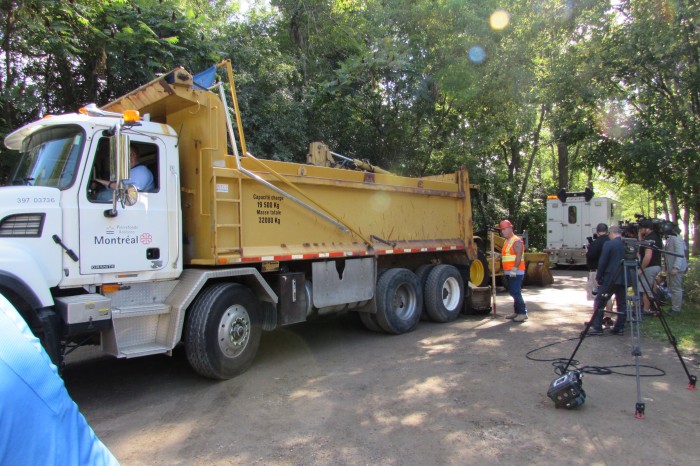 “It is unacceptable that Canada Post puts community mail boxes in our nature parks, they have already littered our streets and local green spaces and parks. We already have a box in the parking lot  of Cap St. Jacques.  We are making a statement today that this is unacceptable,” said the Pierrefonds-Roxboro mayor.

“It is unacceptable that Canada Post does not consult anyone before they put these boxes in,” Beis continued, “especially in an area that is highly used by young families and  safety is an issue.”

On Saturday, Pierrefonds resident Marie-Calire Gagnon defied workers contracted by Canada Post to install a community mailbox system near her property.  In protest, Gagnon sat in the dug out area until police officers asked her to move.

According to Anick Losier of Canada Post, “we have been in discussions with Mme. Gagnon to finalize a new site that will respect her wishes.”

And despite Gagnon and Coderre’s acts, Losier said that “of the 3,000 sites that we have set up, we have had two protests which is not a bad average.

“We know that some people will be upset with the changes and while it can be a challenge to manage everyone’s expectations, these changes made will ensure the sustainability and affordability of our mail delivery system,” said Losier.

According to Therese Lavigne who has lived on Clermont Street in Pierrefonds for more than 43 years the placement of her mail box makes no sense.