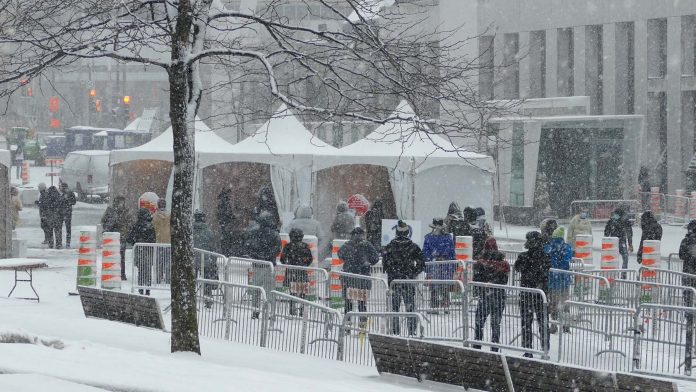 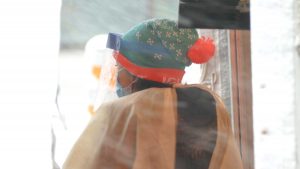 On March 23, 2020, a screening detection centre for  COVID-19 was setup in the downtown core of Montreal.

According to our reporter, makeshift tents were setup in order to receive people by foot and by car in the centre of the city at the corner of Ste-Catherine and Jeanne Mance. Pedestrians were allowed to use an entrance on the south side of the safety perimeter on Ste-Catherine Street before they make their way throughout multiple tents and exit north on De Maisonneuve Blvd. 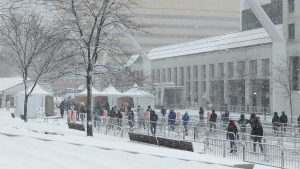 Motorists behind the wheel of the vehicle can get tested too by entering the perimeter on De Maisonneuve Blvd, to the east at St-Urbain Street. Tents for car check ups were setup along the Promenade des Artistes, drivers are to remain in their vehicles. Police officers and security guards patrol the area while numerous potential patients converge towards the command centre.

An appointment with a doctor was necessary to pass a screening test earlier but is now opened to the public.

Premier of Québec Francois Legault announced yesterday the mandatory closing of all businesses, schools, construction sites and other public places until further notice. Essential services remain opened such as gas stations, grocery stores and drug store along with the SAQ and the SQDC. 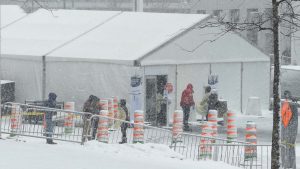 According to Quebec Public health, Care and services

Where: Place des festivals (Quartier des spectacles),
Entrance at the corner of rue St-Urbain and boul. from Maisonneuve

People who meet the following criteria can come for a screening test without having to obtain an appointment from 811
Not everyone who comes to the clinic will have a screening test, the nurses will triage according to the criteria below:

who have had symptoms for 14 days or less

If you show up at the walk-in outdoor clinic

Bring your health insurance card and ID
Dress warmly, the clinic is partly outside
Please follow the instructions of the people on site
Respect the distance of one meter between people, unless you have received a mask
Information about the clinic
14 sorting stations
27 registration stations in a large heated tent
30 screening stations in a large heated tent
125 staff members on site, 8 a.m. to 8 p.m.
Number of tests per day: 2,000
Entry to the site will be by car or on foot.
Those arriving by car must take boul. de Maisonneuve at the intersection of rue St-Denis to head towards the clinic entrance. It will not be possible to access it from rue St-Urbain
It is requested to avoid taking public transport to get to the site. This reduces the risk of spread 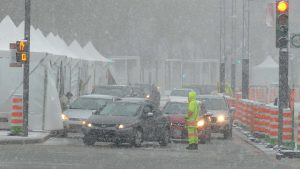 How do I apply for unemployment insurance?