Pamela Gooria lives and breathes yoga. Together with her husband Antoine Tinawi, they created a calm oasis in a suburban setting that epitomizes their entire life philosophy. The oasis, a yoga studio in the Pointe-Claire Village, is called Centre Holistic Om West.

Gooria is passionate, centered, loving and service-minded. She’s also extremely intelligent. Born in Mauritius, she arrived in Montreal when she was 18 to study Computer Engineering at McGill University. After graduating, she worked in robotics at a West Island company that specializes in nuclear medicine.

“I used to work in radiopharmacy. We made machines that dispense a few drops of radioactive liquids into capsules for hospitals for diagnostic and therapeutic purposes. I loved doing it because I’m meticulous. It was helping humanity,” she said. 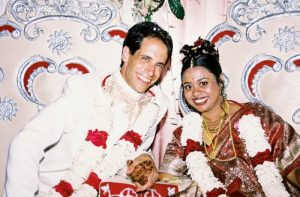 After four years, Gooria left her position to devote time to her other passion — yoga. She also volunteers at the Art of Living Center and teaches vegetarian cooking.

“We only have a certain amount of years. During the time we have, how do we want to live our lives? What counts? Giving back to the community, seeing transformations in people’s lives and bringing happiness means so much to me,” she said.

This year, Gooria and her husband attended the World Culture Festival, a three day celebration of diversity, plurality and acceptance, in Delhi, India.

“Imagine 3.75 million people meditating together. It was incredible. When people chanted ‘om’, there was a wave and we were right in the middle of it. You felt a sense of belonging to everyone in the world. We didn’t have the same skin color or culture. We couldn’t even communicate with words, and yet, there was such a connectedness,” she said. 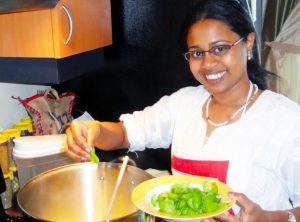 When she travels, she prefers to learn about yoga and visit ashrams and retreat centers rather than monuments or museums.

“To be a student, that’s what matters. People go on vacation and need a vacation from their vacation. When I come back, I’m recharged,” she said.

“It’s like taking a shower every day. If you don’t take a shower, you feel it. It’s the same thing, it’s just cleaning the mind. You wouldn’t go out of the house without doing that,” she said.

Gooria is reflective about the role it, and service, play in her and her husband’s lives.

“It’s our whole life. It’s every breath. Every single moment… I feel so much grace every day, so much love. It’s magic. I would never change that for anything else.”