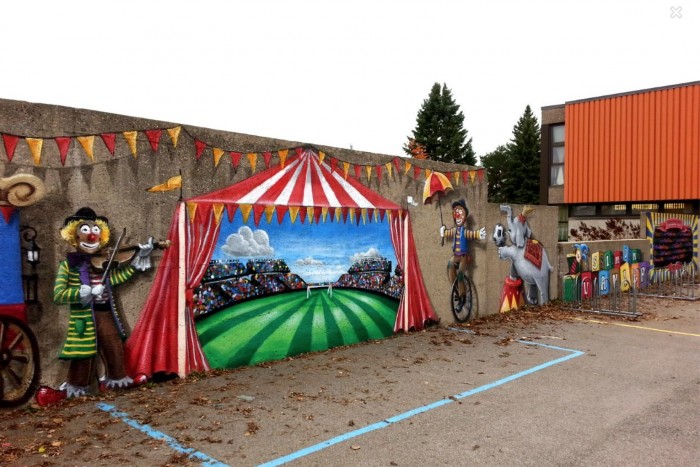 Just in time for back to school Oliver Gaudette, a Fabreville resident, will be winding up his latest contribution to Laval’s beautification.

La Source school in Fabreville, where Gaudette’s sons attend, has a whole new look this fall.

“The school underwent a fire last winter, they repainted the whole school, they asked me to repaint the murals they has commissioned me to do before the fire.” Gaudette told The Suburban in an interview.  “The insurance paid for it so it was a mal pour un bien.” 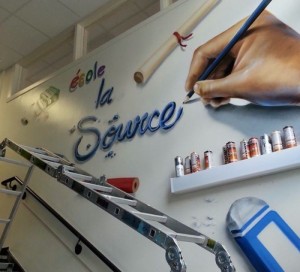 “There are six murals in the school with a few little graphics around the school as well,” Gaudette said.

The school suffered which left them with insurance monies to be spent on revamping the inside of the school.

“My sons have not seen it yet, but for them this is pretty normal stuff, their friends are more impressed than they are.”

Simon Vanier school in Chomedy will also start the new school year off with a two sided mural in the school play ground.  One side shows clowns and circus themed characters surrounded a fantasy sports field while the opposite side has a more traditional view of school books and pencils.

“As part of Laval’s commitment to revitalizing unprivileged areas, they commissioned me to do a path way of images leading to the school,” he said, “I am very grateful to have such amazing projects to work on.”

“For more precise areas I have adaptors for the spray cans to allow more or less pressure,” Gaudette explained, “I like working with spray cans because the colours are ready to go, no mixing as with other mediums. I keep about 200 colours in my car.”

Gaudette has worked on several city projects to date including murals at the Nature Centre, Labelle park, Cartier Arena and most recently the Maison des Jeunes in St. Dorothy commemorating it’s10th year. 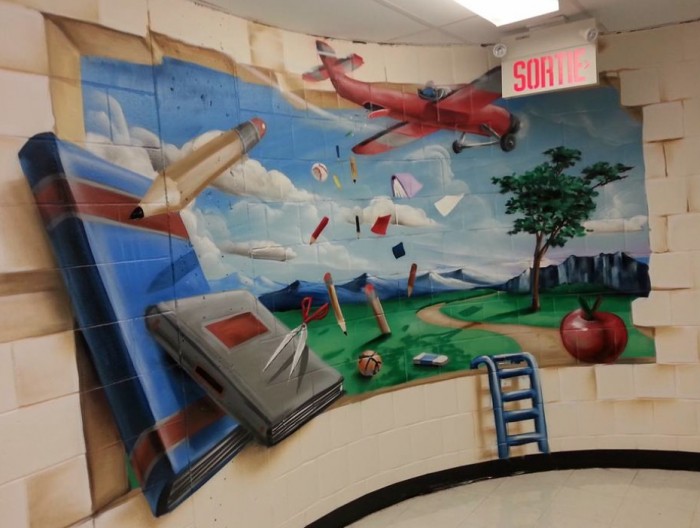