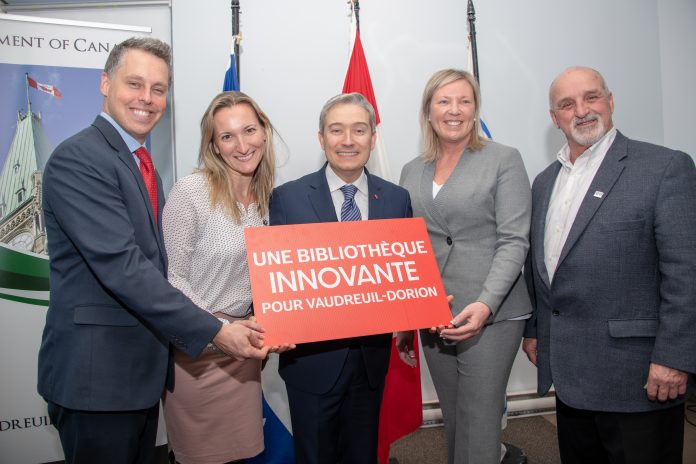 The governments of Canada and Quebec recognize that cultural infrastructure plays a key role in developing dynamic prosperous communities.

The Honourable François-Philippe Champagne, Minister of Infrastructure and Communities, and Marilyne Picard, Member of the National Assembly for Soulanges, announced on Monday, February 18th the funding of a new library near Vaudreuil Station.

The project consists of constructing a 3,000-square-metre new building including a social area, reception and service space, work areas, a section for youth, a creative laboratory and administration offices. This will give locals access to an innovative space with modern technology that meets their needs.

The governments of Canada and Quebec, as well as the City of Vaudreuil-Dorion, will each invest more than $2.4 million, bringing the total government and municipal investment to more than $7.3 million. This financial support comes from the New Building Canada Fund, Provincial-Territorial Infrastructure Component—Small Communities Fund.

“Investing in cultural infrastructure helps build strong communities and support local economic growth. Thanks to this new library—which has three times the space of the old one—the City of Vaudreuil‑Dorion will be able to develop and diversify its services. Residents will enjoy a culturally open environment where they can gather and readers of all ages can make great discoveries.”

– The Honourable François-Philippe Champagne, Minister of Infrastructure and Communities