For the second year in a row the City of Montreal, in collaboration with the Canadian Forestry Service, has unleashed thousands of wasps known as tetrastichus planipennisi to assist in the long-term battle against the emerald ash borer.

For those of you who have been visiting Mars for the past few years, the emerald ash borer (EAB) is the bright green beetle that’s originally native to Asia and eastern Russia and has spread far and wide to many municipalities threatening ash tree canopies.

Since the first detection in Canada in 2002 the emerald ash borer (EAB) has caused countless deaths to ash trees across North America. It’s larve bore labyrinths of tunnels under the bark and disturbs the flow of sap in the tree that dies quickly once infected. 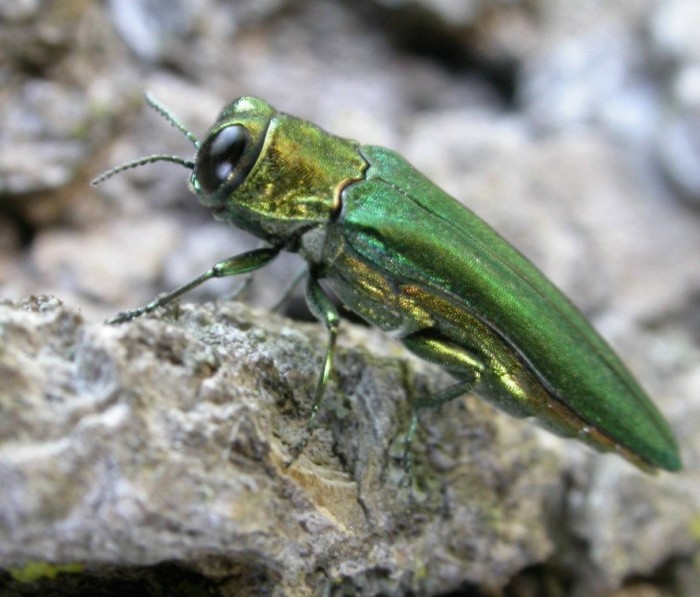 Following several multi-million dollar efforts to deal (and eradicate) the noxious beetle that are as expensive as they were inconclusive, Montreal decided to import the beetle’s natural enemy in order to control, and effectively destroy the invasive beetle’s life-cycle in North America in the long term. Along with introducing its natural predator, the non-stinging parasitic Chinese wasps, the city has been working with Natural Resources Canada setting up fungus traps that once the beetle is lured into, gets covered in fungus, and then spreads the fungus and the disease to its partner during mating.

So far the beetle has been difficult to catch and once a tree losing its leaves or losing its canopy, it is too late to treat.

The most common choice of treatment has been and continues to be Tree Azin. A class four bio-pesticide. Municipal budgets have been increased over the past few years to pay for the expensive treatments that need to be performed every two years and in some cases every year for the life of the ash tree with little to no guarantee of success.

TreeAzin is indiscriminate of insects that consume tree tissues. Not only will EAB larvae be affected, other insects feeding on the treated tree will be as well. Indicating that trees that have been treated will be void of insects forcing songbirds to find alternate sources of nutrition.

According to Health Canada studies determined that the health effects in animals given repeated oral doses of NeenAzal included effects on the blood, liver, thyroid, and kidney. When given to pregnant animals there were irregular bone ossification as well as heart abnormalities. Effects were present in both mother and fetus.

There are no long-term studies on the impact of this relatively new pesticide and the residue left in the water supply.

As previously reported by West Island Blog, according to Forestry engineer Daniel Boyer there is a residue of Tree Azin remaining in the leaves that fall to the ground. Tree Azin should not be injected in ash trees that line bodies of water as it will impact the ecosystems within the water and on the shoreline.