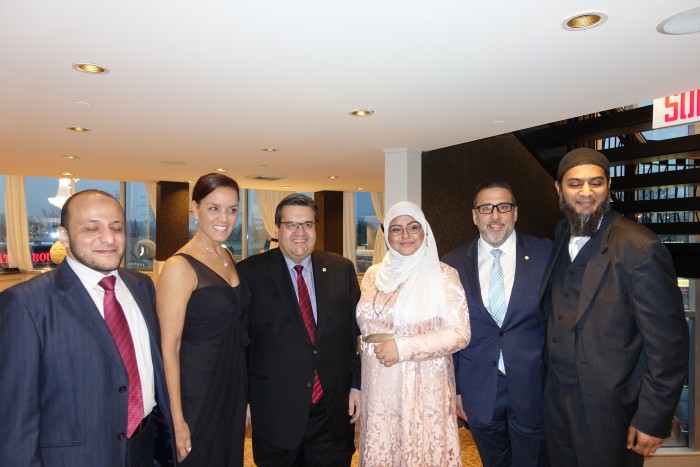 In a hopeful stand to unite the community, the Zakia Foundation, on behalf of the Montreal Muslim community held an appreciation dinner at Casa Grec in Dollard Des Ormeaux on Wednesday, March 28. In attendance were local leaders and community activists who stood up against the tragic shooting in Quebec City on January 29, when a single gunman opened fire during prayers at a mosque, killing six and wounding 19.

According to activist Fariha Naqvi-Mohamed, the event was meant to bring together Muslim organizations from across the city in a show of gratitude and appreciation for elected officials who took the reigns of leadership and guided Montrealers, Quebecers, and Canadians through one of the worst terrorist attacks on Canadian soil.

“Together we have emerged stronger, more unified and even more resilient,” Naqvi-Mohamed stated. “When our elected leaders spoke out it resonated with a community that felt besieged and marginalized. It gave comfort and solace to thousands of individuals at a time when they felt unsafe and threatened.”

“Ignorance and fear are a very dangerous combination,” Baylis stated. “We need to educate to eradicate the fear.”

“When we learn about other religions we gather insight into our own religion,” Reverand Darryl MacDonald explained. “We need to have an appreciation for people of faith no matter what that faith is.”

Shortly after the events in Quebec City, the Masjid Makkah-Al-Mukkaramah mosque opened their doors to welcome the community in an effort to break down barriers. MacDonald followed in reciprocity and invited the Muslim community to an open house at his parish, Roxboro United Church.