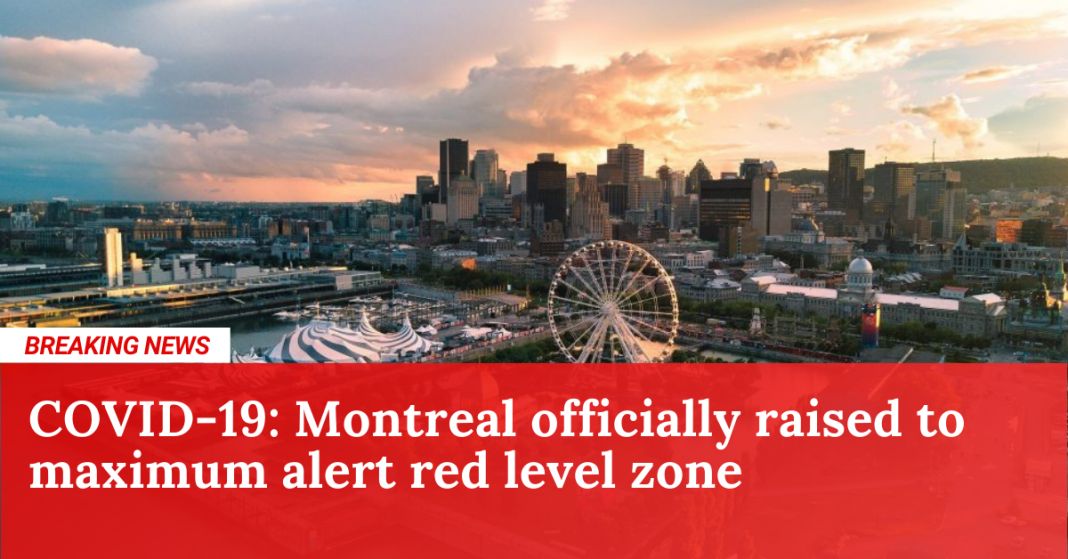 The Premier of Quebec, François Legault, announced today that the city of Montreal has officially been elevated to a maximum alert “red level” zone. The greater Montreal region, the national capital, and Chaudière-Appalaches are turning red as well.

Montreal is entering a lockdown similar to the start of the pandemic as of midnight on Wednesday, September 30th. Gatherings in private homes are now prohibited and only people from the same household are allowed in any residence at the same time.

There are exceptions such as child care and healthcare providers, plumbers, electricians. However, only ONE person can enter the home at a time.

The healthcare system is seeing a surge in patients again indicating the need to implement stronger interventions to flatten the curve. As of this moment, schools are not set to close as Legault states the risk is greater to children’s mental health if we close the schools.

“99% of children can continue to go to school and it needs to remain that way. There is a risk there, but it is a calculated risk,” said Premier Legault.

However, bars, restaurants, and entertainment venues will be forced to shutter their doors starting October 1st for the next 28 days. Restaurant take-out and delivery will still be possible. Gyms, hair salons and hotels will remain open, but libraries, concert halls and museums will also close.

The government is working on a formulation to “compensate for the losses” of the closures of bars and restaurants in October, said François Legault. François Legault also asks employers to promote teleworking as much as possible.

Masks are mandatory during outdoor demonstrations as is a minimum distance of 2 meters between demonstration attendees.

“We can change the trend in 28 days. But it will depend on Quebecers.”

Quebec reported 750 additional cases and 1 death on Monday, bringing the total to 72,651 people infected since the start of the pandemic and 5,826 dead. The province recorded 896 new cases of COVID-19 and four deaths on Sunday.