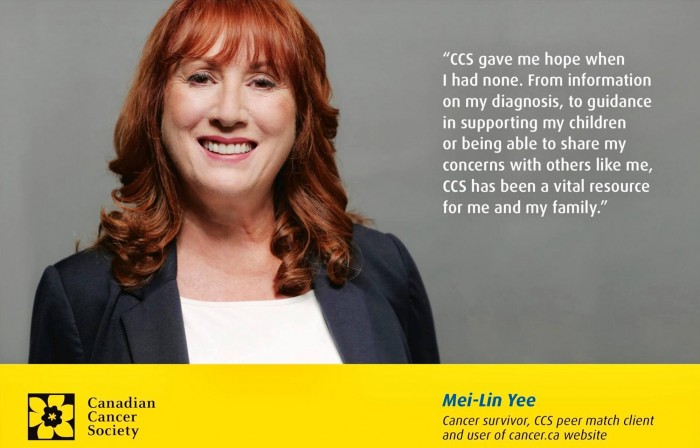 After a hard-fought battle with cancer, Mei-Lin Yee came out on top and spoke about her experience in parliament in Ottawa on March 4th in honour of for World Cancer Day.

“I’m really appreciative about how open all these people were and how willing they were to listen to my story and share their own personal stories,” says Lee about the reaction of the MPs and senators present in the crowd.  “It was nice to see not only the political side but the humanitarian side as well.”

Yee was diagnosed with metastatic cancer ten years ago, though it quickly spread throughout her body.  She was told that the cancer would be terminal and to get her affairs in order, yet, after 174 treatments, five surgeries and undergoing chemotherapy for five years, she beat nearly insurmountable odds as the cancer was entirely removed from her body.

Yee says she would not have been able to do it without the support of the Canadian Cancer Society.  “They were there when I needed to talk to someone,” she says.  “They provided me with an understanding of what I was going through”.  Yee says the Canadian Cancer Society offers a helpline that cancer victims, along with their families and friends, can call anytime if they need help or support throughout their experience with cancer.

Despite the devastating effect of cancer worldwide, Yee feels that there needs to be more awareness about this disease.  She feels that the observation of World Cancer Day, which began in 2008, is an important step toward increasing awareness, but there’s still more to be done.  “If governments around the world recognized the day, we’d hear more about it,” she says.  She believes that an increase in advertising and marketing from a government standpoint would decrease costs for organizations like the Canadian Cancer Society so that they can utilize their funds and resources for support and treatment rather than on their own advertising.

Yee remains dedicated to supporting the Canadian Cancer Society and helping her fellow citizens battling cancer, both here in the West Island and throughout the country.  She is currently organizing the annual Spinathon fundraiser in the West Island to raise money for the Canadian Cancer Society.  She is also studying towards a Master’s Degree in Law and Public Health Policy at the University of Sherbrooke.  “It’s really important if I want to be a patient advocate and understand how to use the law to help people,” she says.

To learn more about the Canadian Cancer Society, click HERE.

To see the support services offered by the Canadian Cancer Society, click HERE.

To learn more about the annual Spinathon, held this year on March 23rd, click HERE.