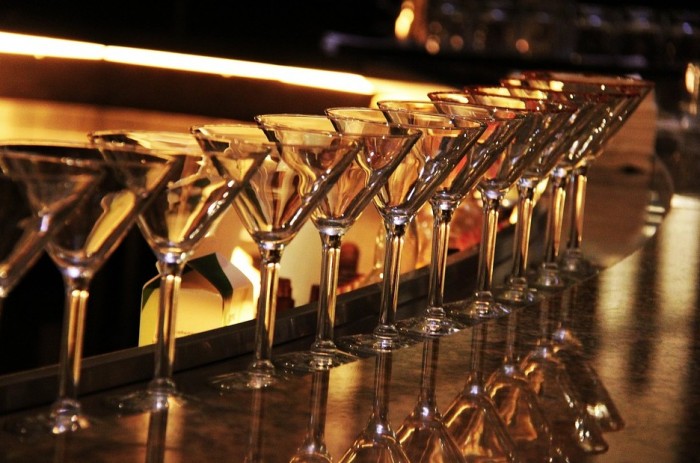 Written by Wendy Hunt for the Mansfield Pointe Claire

On Friday night October 21, the Mansfield Pointe Claire hosted its first “Spini Martini” fundraiser event to support the Lakeshore General Hospital Foundation .   I would never have thought that working up a sweat in a 3-hour spin class and drinking designer martinis would be compatible, let alone come to any good.

But I was wrong.

As the beat of the spinning class music filled the speakers in the spinning room and a light show of strobes and colored beams danced on the walls, I noticed an older woman walk hesitantly over to a vacated bike and struggle with the settings to lower the seat.  I started over to help her, but before I could, a fellow spinner jumped off his bike to give her a hand.  When I left the room she was spinning away in time to the music and when I stopped by an hour later, she was still riding – her face bathed in blissful sweat.  I brought her a towel and a bottle of water (generously provided by Provigo, Baie d’Urfe)  and asked if she was new to spinning. “Not anymore” she replied with a wide grin on her face. 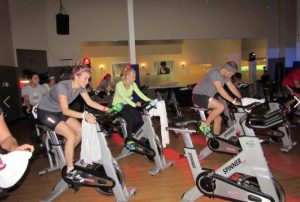 Spinning is a cult, or maybe a religion.  The true keeners go early to class, ready to claim their “regular bike” with their water bottle and towel.  Yet once the class begins, all participants are just “devoted followers”, ready to stand or sit or sprint at the calling of the instructor on the pulpit.  On Friday night, as the spinners left the fundraiser spin class, be it the full three hours or a half hour stint as part of a team, there was a common glow of achievement, or was it enlightenment, on their perspiring faces.  Each participant had proved something to themselves.  But with no record of speed, watts or distance ridden, there was nothing to divide the beginner from the most fit.  And for each person, the achievement went beyond their time on the bike, because they had each participated in something bigger than themselves. No wonder members flock to the spinning classes at the Mansfield gym!

After a much needed shower and with a saffron infused or cranberry martini in hand ,served by Pur Vodka , the  spinners and non-spinners alike relaxed on the couch and chairs provided by Sears or perused the silent auction items that were generously donated by Lululemon, Curage, Mobilia, Terrafolia and Party Mania amongst others.  Delicious appetizers were served by Towne Hall and there was great music while an enthusiastic MC from Big Moe Productions gave out the raffle ticket prizes – more generous donations to the fine evening.

The Mansfield staff along with their sponsors and contributors managed to put on a superb fund-raising event to support the Lakeshore Hospital Foundation.  But perhaps more importantly, the spinners, non-spinners and all the volunteers that made the event possible, have shown that a gym can be more than just a place to work out.  Belonging to a gym can also mean being part of a community where people get involved in activities that improve the lives of others, and in this case, help the patients in the ICU at the Lakeshore Hospital.  Working out can give you a buzz, but helping others?  Nothing beats it.

Spinning and Martinis –  unlikely but effective partners after all.