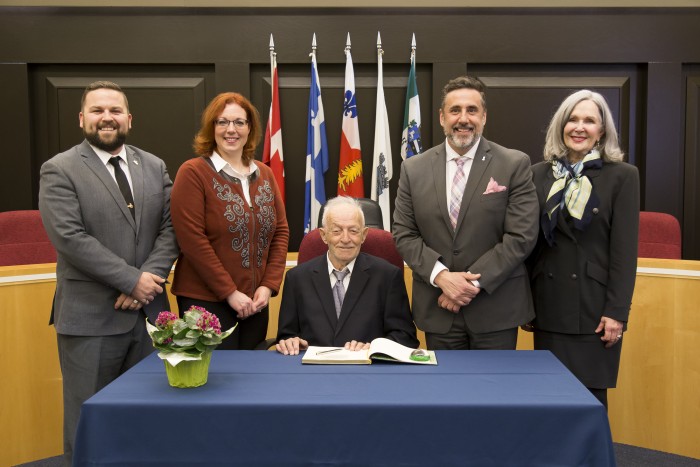 On Monday, February 12th Mayor Dimitrios (Jim) Beis launched the “Mail Carrier’s Memories” heritage project—a series of eight video clips featuring historian and former mail carrier Marc Locas, who has lived in Pierrefonds-Roxboro ever since he was born, 86 years ago. These video clips—the first of which was premiered on Tuesday, February 13— is available on the Borough’s Facebook page and Internet site.

“The history and heritage of our Borough are very important to me and the Council members. We have therefore enthusiastically supported this collective memory project that revolves around Marc Locas, a passionate resident who has devoted a large part of his life to the history of the parish. We are particularly pleased to highlight his outstanding contribution to our heritage by having him sign the Borough’s guest book,” stated Dimitrios (Jim) Beis, Mayor of Pierrefonds-Roxboro.

Mail carrier’s memories
Within the festivities celebrating Montréal’s 375th anniversary, the Société patrimoine et histoire de L’Île Bizard et Sainte-Geneviève presented a historical and heritage exhibition centred around Marc Locas. In order to engrave the exhibition in time and extend it past its run, video clips on various themes relating to the history of Pierrefonds-Roxboro and its residents were produced. In these videos, Mr. Locas, “a real living memory”, shares his knowledge and countless memories, all with a touch of humour and pleasant spontaneity