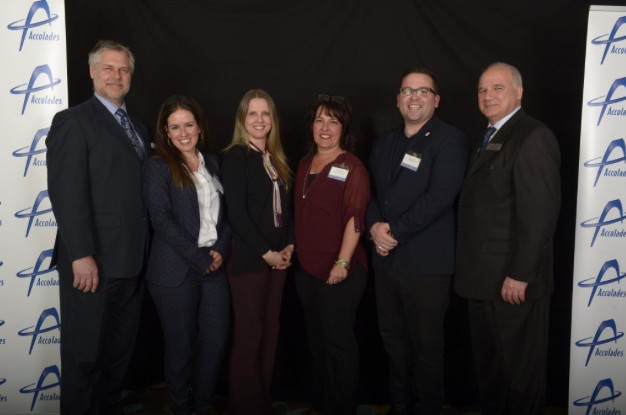 Literacy Unlimited is excited to announce that they have been selected as one of three finalists in the Community Service Category of the 2017 Accolades Gala of The West Island of Montreal Chamber of Commerce!

Literacy Unlimited is a non-profit organization that provides free one-on-one English adult literacy tutoring. The organization was founded in 1981 and continues its work to this day, amidst remarkably low adult literacy statistics in Quebec. The group prides itself on being able to sustain a one-on-one tutoring model, which fosters a sense of trust and privacy in those seeking help. They are honoured to be selected as a finalist for the Accolades – an event rewarding business excellence in the West Island, offered by a pillar organization in the community.

Nominees were unveiled at a ceremony on April 19th at the Pointe Claire Holiday Inn & Suites, and the organization received a personal visit to their premises on May 16th to be awarded their official finalist plaque.

“We were told that the competition received a record number of entries this year”, said Executive Director Lucy Baum. “We regard it as a special honour to be selected from among other local non-profit groups who make a difference in our community every day. This is a way to celebrate the achievements of not only our organization for over 35 years of community service, but also the achievements of our learners. They are the true heroes here, overcoming huge personal hurdles to ask for help with literacy, something many of us take for granted.”

Winners will be announced on Thursday, June 1st, during the 2017 Accolades Gala that will be held at the Montreal Airport Marriott In-Terminal Hotel, 800 Place Leigh Capreol, Dorval, QC  H4Y 0A4, Opale Room.