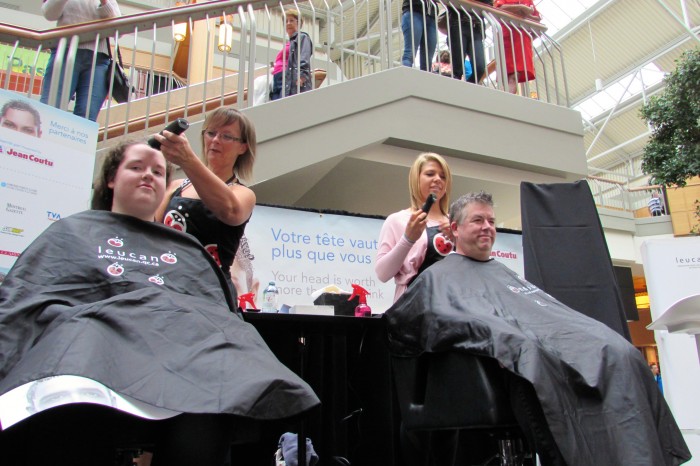 The 9th edition of the Leucan Shaved Head Challenge, presented by Jean Coutu took place last Sunday, September 13, at  Fairview Pointe Claire. While raising money for the cause, the event represents an act of solidarity for all children who have lost their hair from chemotherapy treatments.

“My family shaved their heads before I underwent chemotherapy,” Nalie told the crowd, “it meant the world to me.”

Pointe Claire city Councillor and acting mayor, Jack Beaumont, encouraged the participants on behalf of the city of Pointe Claire.

“I am very proud to be part of the event today, I am 72 years old and undergoing cancer treatment myself,” Beaumont said.

Marie-Claude Leroux and her father Sylvain Leroux shaved their heads in unison for the sake of children with cancer.

“This is my sixth time doing this,” Sylvain Leroux said, “I do it because I am lucky and my children are healthy.”

Local dance studio 8 Count Dance Complex gave an dance performance, CHOM’s  Bilal Butt, co-honorary president of the Leucan Shaved Head Challenge spoke to the crowd and  Ted Bird of Jewel FM announced on stage that he was to shave his head the following day on his radio show.