For the 9th edition, the Leucan Shaved Head Challenge, presented by Jean Coutu will take place at Fairview Pointe Claire on Sunday, September 13th from 12 p.m to 3 p.m.

During this event, nearly 40 participants will put a price on their heads and face the clipper to rally around cancer-stricken children and their families.

This major fundraiser not only raises a significant amount of money for the association, but it represents a powerful act of solidarity for all children who have lost their hair from chemotherapy treatments.  When the participants are revealed their transformation in the mirror for the very first time, their reactions are often touchingly emotional.

Witnessing the bravery, generosity and compassion of all participants is truly the highlight of the event.

At one of the challenges, Michael, the 6 year-old spokesperson for the Montreal-Laval area, diagnosed with Wilms tumor at only 4 years old shaved his hair despite having just grown it back post-chemotherapy. His bare head brought tears to his parents` eyes. But now, his shaved head no longer represents his sickness, but his courage and selflessness to help other children in his shoes.

Last June, inspiring 18 year-old Brontë Poiré Prest sat on the barber chair and had her long brown hair shaved off stating, “I’m doing it to show that one’s beauty isn’t in her image, but in her strength.” Participants like Brontë help prove to cancer-stricken children that they are still beautiful, despite the disease. 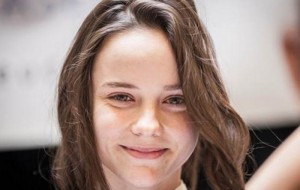 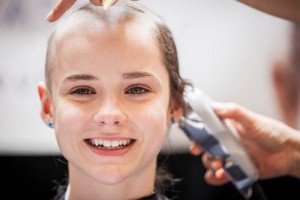 Leucan invites everyone to come and cheer on such heroic and noble participants like Michael and Brontë. It is still possible to take on the Leucan Shaved Head Challenge individually or in groups. For more information, please call 514-731-3696 or visit shavedheadchallenge.com

The first Leucan Shaved Head Challenge took place in Montérégie in 2001, thanks to Mr. Serge Tremblay. He wanted to show solidarity towards these children and support them in a significant matter. For the first edition, 65 participants raised $10 500, The Challenge successfully grew and in 2004, became a Provincial Event. Since its very beginning, more than 60,000 participants from the four corners of the province took on the Leucan Shaved Head Challenge. The 13th edition in 2013, to which thousands of participants took part, helped raise $4.7 million for children with cancer.

For more than 35 years, Leucan has been supporting cancer-stricken children and their families. As a loyal ally of hundreds of families and thousands of members across Quebec, the Association provides specific and personalized services to its members, in addition to funding clinical research. Leucan`s skilled staff developed a cutting edge expertise in the following areas: support and emotional assistance; financial assistance; referral services; massage therapy; hosting in hospital playrooms; socio-recreational activities; school awareness; end-of-life and bereavement follow up services; support to cured patients; and the Leucan Information Centre.

September is Childhood Cancer Awareness month. What better time to participate in the challenge. Register or donate today at www.shavedheadchallenge.com

The event will be hosted by the talented Alex Despatie, one of the world’s most skilled divers, three-time Olympian and now host on Breakfast Television.

Support to the pediatric oncology centres

Leucan is active in the 4 pediatric oncology centres in Quebec: CHU Sainte-Justine, Montreal Children’s Hospital of the McGill University Health Centre, the Centre mère-enfant du CHUQ and the CHUS. Every year, the Association is contributing close to $1,000,000 to help financing clinical research, and finances the Leucan Information Centre located in the Centre de cancérologie Charles-Bruneau at Sainte-Justine UHC, which provides services for the whole province.