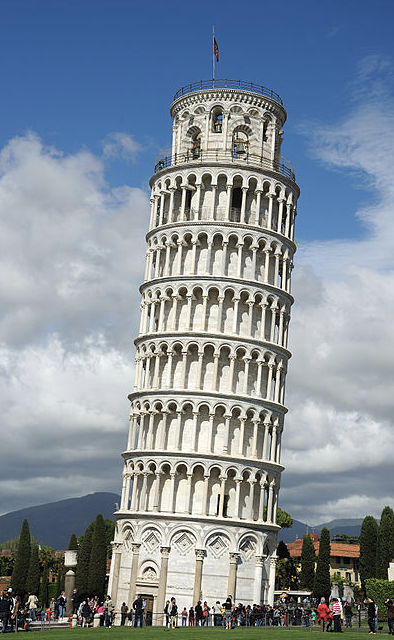 The Leaning Tower of Pisa.

Although only a third as high as the Washington Monument, it was a miracle of medieval engineering, probably the tallest bell towers in Europe.The Leaning Tower of Pisa is the piazza’s crowning glory.

With 207 columns ranged around eight stories, Tower of Pisa looks like a massive wedding cake knocked precariously askew by a clumsy giant guest.

The construction of Tower of Pisa began in August 1173 and continued for about 200 years due to the onset of a series of wars. Till today, the name of the architect is a mystery.

The tower has eight stories, including the chamber for the bells.

The final story is the bell chamber itself, which has 16 arches. There is a 297 step spiral staircase inside the tower leading to the top.The bottom story consists of 15 marble arches. Each of the next six stories contains 30 arches that surround the tower.

The top of the leaning tower of Pisa is about 17 feet off the vertical.

The tower is also slightly curved from the attempts by various architects to keep it from leaning more or falling over.

Many ideas have been suggested to straighten the Tower of Pisa, including taking it apart stone by stone and rebuilding it at a different location.

In the 1920s the foundations of the tower were injected with cement grouting that has stabilized the tower to some extent.

Until recent years tourists were not allowed to climb the staircase inside the tower, due to consolidation work.