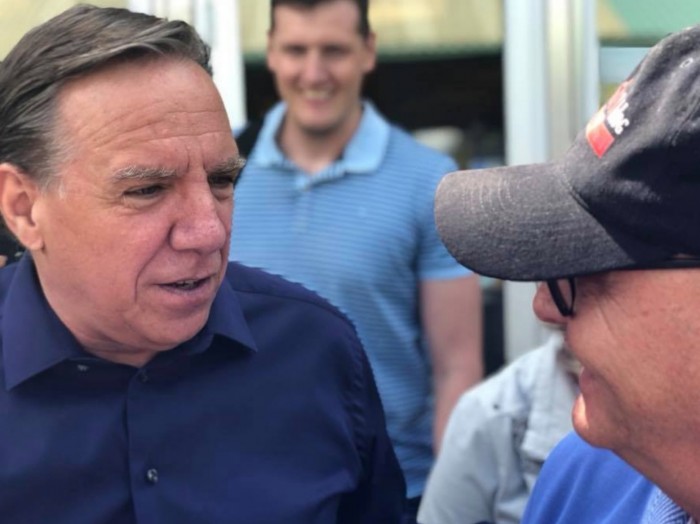 Quebec Premier Francois Legault said Thursday health risks for younger people returning to work are limited considering almost all Quebecers who have died of COVID-19 are over the age of 60.

And if those younger workers — particularly in the province’s important construction sector — can keep away from their parents and grandparents, “then we can start to reopen,” Legault told reporters during his daily news conference.

But the premier was guarded about when that will be and which businesses outside the construction sector will be allowed to operate when the province-wide shutdown ordered in March is eased.

What is becoming increasingly clear, Legault said, is that the COVID-19 infection rate in the province is expected to peak “in the next few days.” Government projections released Tuesday estimated the peak would arrive around April 18.

“We need to ensure that is true,” Legault said, “but the numbers are holding up. It’s been a few days now.”

Legault and the province’s director of public health, Horacio Arruda, say their number one priority is to control the spread of COVID-19 in order to reduce the number of deaths.

But in recent days, they both have begun talking about a need to balance economic growth with an acceptable rate of infection.

Figures released Thursday show Quebec had the largest unemployment rate increase in Canada in March, rising by 3.6 percentage points to 8.1 per cent. Legault said hundreds of thousands of Quebecers are in financial difficulty, and Arruda added that Quebecers cannot expect to eliminate all new infections.

“We will finish by accepting a certain level of transmission in society so that (the virus) burns itself out in time,” Arruda said. “We will always evaluate the balance of risks of reopening versus the potential pandemic context.”

He said his medical team will evaluate each sector of the economy, region by region, and make recommendations to the premier. Legault said he will focus on opening businesses “where people can keep a distance of two metres.”

Legault had shut down all businesses deemed “non-essential” in March and after initially considering a reopening in mid-April, extended the order until May 4.

The premier has recently suggested that key sectors, including construction, could open sooner. Construction alone employs hundreds of thousands of people and generates annual investments in the province of around $40 billion, according to the provincial agency that oversees the industry.

Yves-Thomas Dorval, president of Quebec’s main federation of employers, said Thursday he is happy with the optimistic tone shown by the premier. Dorval said his organization, the Conseil du patronat du Quebec, will have a concrete list of proposals for the government by the end of next week on how to reopen the provincial economy.

Dorval said the business community is concerned authorities want to restart the economy sector by sector, as opposed to taking a broader approach.

All businesses that are able to protect their workers and limit the spread of COVID-19 among their customers, he said, should be able to begin operating at the same time, to avoid the most disruption.

“The government wants to go by sector, by task, by job — we won’t get out that way,” he said in an interview. “I think we can move into a context of relaunch or reopening of the economy, with general principles on public health.”

Dorval says businesses that cannot always ensure workers and clients maintain a distance of two metres should still be able to open — under certain conditions. Those include equipping employees with protective gear, limiting contact with clients and ensuring all customers maintain adequate distance between themselves, he said.

Quebec reported 41 new deaths linked to COVID-19 Thursday, bringing the total to 216 in the province. Provincial health authorities said there are 10,912 confirmed cases of the virus, with 679 hospitalizations and 196 patients in intensive care.

Ninety per cent of those who died were 70 years old or older and another nine per cent were aged between 60 and 69 years old, Legault said.

This report by The Canadian Press was first published April 9, 2020.