A West Islander from the get-go, 27-year-old, Lauriane Rougeau skated off with a Silver medal in women’s hockey at the 2018 Olympic Winter Games in Pyeongchang. On Thursday, Team Canada lost 3-2 in a shootout to the 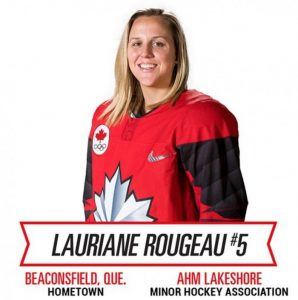 United States in the gold medal game. The silver medal was the 22nd medal to be won by Team Canada thus far.

Rougeau was born in Pointe Claire and calls Beaconsfield home today. She started playing hockey at age five, graduated from Cornell University with a Bachelor of Science in Nutrition, earned her Master’s of Human Kinetics in Sports Management from University of Ottawa, according to the Canadian Olympic Team’s official website.

Rougeau’s long list of accomplishments includes captaining Canada to silver at the 2008 IIHF U-18 Women’s World Championship in Calgary where she was named top defenceman, and in 2012 she helped win a gold medal for the National Women’s Team. Rougeau competed in her first Olympic Games at Sochi 2014, helping Canada win its fourth straight gold medal in women’s hockey. She then won three more world championship silvers in 2015, 2016 and 2017.