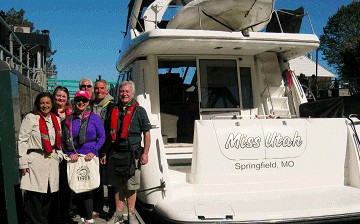 In 2017, Parks Canada is celebrating the 150th anniversary of Confederation by offering free entry to ALL national parks, national historic sites, and national marine conservation areas across Canada. On Quebec and Ontario’s historic canals, this means that pleasure crafts and non-motorized boats will be able to go through locks free of charge to access major cities as well as their favourite bodies of water. It’s our way of wishing you a happy 150th!

Following the exceptionally high water levels and flooding that have delayed the opening of the navigation season on Carillon, Lachine, and Sainte-Anne-de-Bellevue Historic Canals, Parks Canada has done everything necessary to ensure their repair and their complete reopening as early as possible. It should be noted that the Sainte-Anne-de-Bellevue Canal Park is partly closed to visitors along the banks and that some wharves will not be accessible to recreational boaters for an indefinite period. Parks Canada will inform the population of the reopening of facilities as soon as possible.
Eager to take part in this wonderful experience? Visit Parks Canada Website to learn about the many opportunities offered by Canada’s historic canals, and order your free lockage permit now! Spread the word, and enjoy the 2017 boating season! parkscanada.gc.ca/canals.