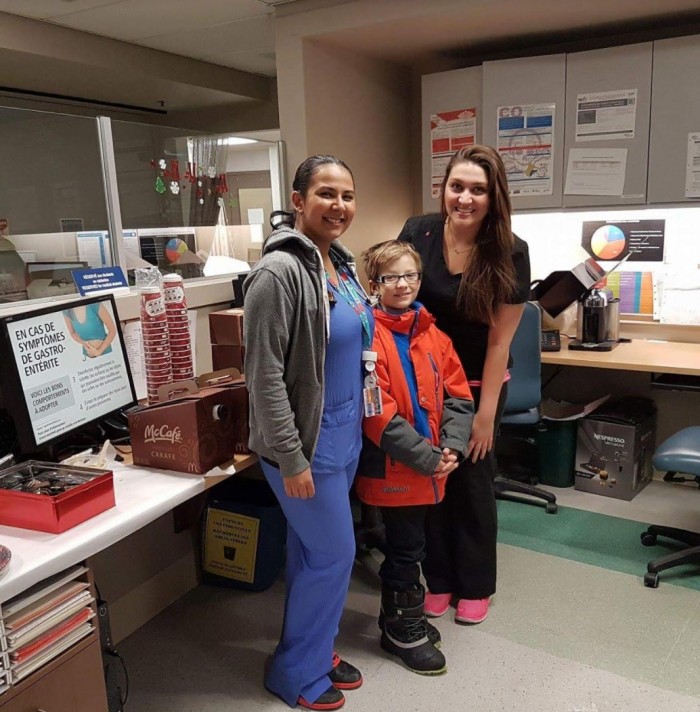 After watching a facebook thread of a hockey mother’s experience at the ER at the Lakeshore General Hospital (LGH) late last week, Glenni Lopez took matters into her own hands and brought coffee and Timbits to the exhausted emergency room night staff.

“I am one example of these poor people being overworked to the point of unnecessary risk,” Lopez explained to the West Island Blog. “The health minister is letting us down.”

During a recent stay at the West Island Hospital Lopez found herself taking her medical situation into her own hands.  Built in the 1960s to serve a bedroom community of 60,000, the Lakeshore General Hospital (LGH) has since seen multiple expansions and transformations. The population served has now quintupled to nearly 300,000. With an aging population in its catchment area, the LGH is now treating ever-more complex medical and psycho-social conditions.

“I can be an excellent example of the good and the bad,” she explained. “I was given medication I was allergic to. I walked to the nurses station with the IV in my hand, because no one was coming. That mistake and coupled with a few other caused heart complications.

Lopez feels that speaking out may help the powers that be understand how grave the situation has become. Long waits in an ER that is commonly running over 250% capacity.

“It is time to speak out and give the the doctors and nurses a hand,” she trumpetted, “to show them gratitude for staying in a province that pays less than others and has no regards for their working conditions.”

On a cold January day, with the ER jammed with ailing people from as far away as Vaudreuil-Dorion, Lopez and several volunteers brought Timbits and coffee to those working the graveyard shift. The same team showed up on New Years Eve as well.

“This is not the fault of the dedicated staff at the Lakeshore General Hospital, they are short staffed and mistakes happen when everyone is overworked.”